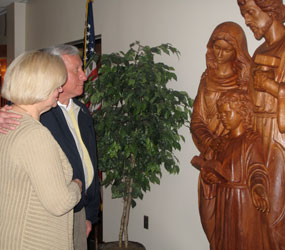 SEVERNA PARK – John and Linda DeMichiei stared at the face of Jesus and saw their son, John Jr., April 11.

The couple donated a cedar wood statue, which depicts a young version of the Holy Family, to St. John the Evangelist School in Severna Park. The likeness of Christ bears some of their son’s features as a preteen.

“I see it in the forehead and the eyes,” said Linda DeMichiei as she wiped tears. “It’s beautiful. It’s really a blessing.”

The 800-pound, six-foot statue was created by artists trained at the Don Bosco School in Chacas, a remote mountain town in Peru. The school provides academic and vocational training to students who are orphaned, homeless or living in extreme poverty. The Artesansos Don Bosco have a Baltimore showroom for their furniture and religious art, which is displayed in several parishes throughout the archdiocese. The Holy Family statue was created in honor of John Jr., who died at the age of 29 in 2008 in a manner the family chose not to disclose.

The figure features the Blessed Virgin Mary lovingly placing her hand on Jesus’ right shoulder, while St. Joseph clutches a hammer and looks proudly upon his family. Jesus holds a book in his right hand and his left stretches to beckon all to come to him.

“As you walk in the door, you see that welcoming hand,” Sister Linda said. “I wanted Jesus to be school-aged so the children could see him like them every day. It’s absolutely beautiful.”

John DeMichiei Sr. is president of Montana-based Signal Peak Energy. He said the owner of his company gave $5,000 toward the statue, which had a final cost of $18,730.

The family’s third child, Katie, is a graduate of St. John. The DeMichieis said the school and parish communities were exceptionally supportive during the family’s mourning process. The statue reflects the DeMichiei bonds and faith.

“The real focal point was the family,” John Sr. said. “Family has always been extremely important to us, as is the role of children, the father and the mother. It was an opportunity to project what we’ve always believed, including the subtleties that sometimes don’t come across when you’re talking about a family.”

It’s an undeniably Catholic presence at St. John, which was named a Blue Ribbon School of Excellence by the U.S. Department of Education in 2008.

“The number one reason why people come to St. John’s, and to Catholic schools, is Catholic identity,” said school board chair Richard Huebler. “I think that exists in this community and that statue is a symbol that it exists here.”

Linda DeMichiei said the Holy Family will be a lasting gift to all who enter St. John the Evangelist School.

“It’s a constant reminder of why we’re here,” she said. “They are our models for life.”