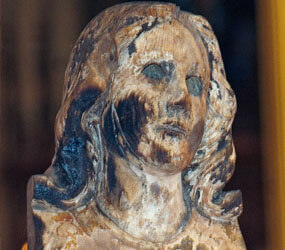 NEW YORK – Archbishop Joseph Mitsuaki Takami of Nagasaki, Japan, was an unborn child in his mother’s womb on Aug. 9, 1945, when the second atomic bomb obliterated his hometown. The blast killed about 75,000 people and brought an end to World War II.

On May 2, the day before he was to take a joint message from himself and Bishop Joseph Atsumi Misue of Hiroshima to the United Nations calling on world leaders to “take a courageous step toward the total abolition of nuclear weapons,” the archbishop brought perhaps one of the most compelling artifacts of Nagasaki’s inferno to St. Patrick’s Cathedral, where he concelebrated Mass.

The scorched head of Mary is all that remains of the statue that had once graced the main altar of Nagasaki’s Urakami Cathedral before it was destroyed in the blast.

The monthlong U.N. Review Conference of Parties to the Treaty on the Non-Proliferation of Nuclear Weapons began May 3.

“We as the bishops of the Catholic Church of Hiroshima and Nagasaki in Japan, the only country to have suffered nuclear attacks, demand that the president of the United States, the Japanese government and the leaders of other countries make utmost efforts to abolish nuclear weapons,” the statement reads in part.

“How sad and foolish it is to abuse the progress that humanity has made in the fields of science and technology in order to destroy lives as massively and swiftly as possible,” it adds.

As a first step, the Japanese prelates called upon U.S. President Barack Obama to establish a policy of “sole purpose,” which would “limit the purpose of retaining nuclear weapons to deterring others from using such weapons only.”

Archbishop Takami said he hoped the statue would focus attention on the enormous destructive power and inhumanity of nuclear weapons and on the importance of working toward their elimination. The partial bust exudes a haunting and tortured beauty; the eye sockets black and empty like the eyes of those who gazed into the fury of the initial flash.

“My message in bringing the statue is to ask, through the intercession of Mary, that such weapons no longer be used, that we work for peace,” he told Catholic New York, archdiocesan newspaper, through an interpreter after a Japanese-language Mass May 2 for New York’s Japanese Catholic community at St. John the Evangelist Church.

“Too many (of these) weapons exist,” he said. “First we have to abolish all these weapons to eliminate the danger of war. And then there are many things to do.”

Archbishop Takami has more than a purely spiritual or philosophical rationale for seeking the elimination of nuclear weapons. The Nagasaki blast claimed the lives of two of his aunts and his grandmother. A cousin died 14 years after the war from bomb-related illnesses. He was born March 6, 1946, and raised in the long shadow cast by Nagasaki’s mushroom cloud.

“My mother spoke about it, but not so many times,” he recalled. “Because she didn’t want to speak about it. Her experience was so sad.”