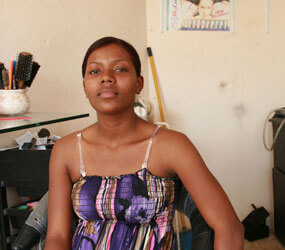 MANOGUAYABO, Dominican Republic – Until her son was born, Maria Rosa Remier never questioned her nationality. By all measures, she considered herself Dominican.

“I was born in the Dominican Republic. I speak Spanish like a Dominican. My friends are all Dominicans. I’m Dominican,” she said during an interview in a closet-sized beauty salon she opened earlier this year.

Being born in a country might be enough to gain citizenship in most nations, but the Dominican government considers Remier a foreigner.

That’s because the government does not grant citizenship to people who were born in the country if their parents were “in transit” at the time. Those in transit include undocumented immigrants such as Remier’s parents, who came from Haiti four decades ago to work. Remier probably does not qualify for citizenship in Haiti, either.

That means she is stateless.

Remier shares the predicament with hundreds of thousands of other Dominicans of Haitian descent and millions of other people across the globe. For myriad reasons – human trafficking, refugee flight or exclusion based on race or ethnicity – 12 million people are stateless, the U.S-based Refugees International estimates.

They are often left without access to basic services. They can’t travel. In countries such as the Dominican Republic, they have trouble getting a job, marrying and enrolling their children in school.

“People without citizenship and, more broadly, those without documentation, don’t have access to the things they need to live a dignified life,” Father Alfredo Infante, director of Jesuit Refugee Service in Latin America, told Catholic News Service from Venezuela.

In 1961, the United Nations’ Convention on the Reduction of Statelessness sought to ensure that all people could claim citizenship, either in the country where they were born or through the nationality of their parents.

In Brazil, for example, about 200,000 children born out of the country but to Brazilian parents were not considered citizens under that country’s laws. In 2007, the government passed a constitutional amendment changing the law and retroactively granting citizenship to those children.

Last year, 18 countries signed onto the Brasilia Declaration on the Protection of Refugees and Stateless Persons in the Americas. This year, the 50th anniversary of the U.N. convention, will be key in ensuring countries enact into law the declaration’s provisions, said Andres Ramirez, representative of the U.N. High Commissioner on Refugees in Brazil.

“We do not have the same problem of statelessness that other regions around the world experience, thanks to the fact that most countries in the region give citizenship to people born in their countries,” Ramirez said. “But that’s not to say everything in rosy. We still have issues and there is work to be done here.”

For example, poor women living in isolated villages often do not register their children at birth, putting that child at risk of growing up without proof of their nationality, Ramirez said. A 2009 study by the United Nations found that as many as 1.3 million children per year are not registered at birth in Latin America.

Without proper documentation, people can have trouble accessing services. In some cases, the risks are greater.

“There is clearly a nexus between statelessness and human trafficking,” said Alanna Ryan of the International Catholic Migration Commission. “People who don’t have documentation are more likely to be trafficked.”

People lack documentation for many reasons.

Miguel, who asked that his full name not be used because he fears for his safety, fled his farming village in Colombia under the threat of death late in 2010. He was given a few hours to pack up his belongings and make the long walk to the nearest city with his wife and son. They eventually found their way to a Catholic-run safe house in Ecuador.

“We came here with nothing. We had no money. We had no clothes. We had to leave all of our documents behind,” he said in an interview in December from the safe house. “Now we need to go through the process of applying for documentation as a refugee here in Ecuador. But that takes a long time.”

The children of Haitians who have been stripped of their citizenship in the Dominican Republic have neither the rights of a normal citizen nor the claim to citizenship elsewhere.

The potential is enormous: Up to 1 million Haitians live in the Dominican Republic, many without the necessary documentation. What frightens Catholic groups is that it’s not only the children of Haitians, but also their children and their children’s children who will never attain citizenship.

“Right now, we’re talking about potentially hundreds of thousands of people who are in this situation,” said Sonia Adames, director of the Jesuit Refugee Service in Santo Domingo, the Dominican capital. “Most of them don’t know they’re in this situation until they go to apply for a cedula (national identity card) or their birth certificate and are denied.”

Remier never knew the government considered her a foreigner until she applied for a national identity card so she could register the birth of her son and enroll him in school.

“They said that I could not get a cedula because of the situation with my parents,” she said. “To them, I don’t exist. But I was born here.”

The Dominican government has defended its constitution. In a hearing before the Inter-American Commission on Human Rights March 29, the head of the civil registry, Roberto Rosario, said Dominicans of Haitian descent are eligible to register themselves as foreigners, which would entitle them to services.

Jesuit Refugee Service is challenging the Dominican policy. It has filed five lawsuits in Dominican courts. In four of those cases, the plaintiffs have been granted their citizenship. The fifth is pending.

Adames said the cases are intended to test the system so that other Dominicans of Haitian descent can potentially challenge the government and gain their citizenship.

Meanwhile, Remier is not giving up regardless of what the government tells her.

“I can’t send my son to school because I can’t get the correct documentation. I was born here and he was born here. I’m not going to let anyone tell me I am not Dominican,” she said.