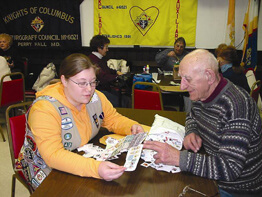 What started out as a service project for a 14-year-old St. Francis of Assisi, Baltimore, parishioner has developed into a love of stamps and a devotion to a community of retired sisters.

When Molly Friedel of Carney was an 11-year-old Girl Scout looking for a service project to earn her “I Live My Faith” religious badge, she turned to the Father Barggraff Council of the Knights of Columbus in Perry Hall, where her father Ken is a member.
This branch of the Knights had been collecting postmarked stamps for retired Sisters of Saints Cyril and Methodius at Villa Sacred Heart in Danville, Pa. since 1994 to help that group meet its financial obligations.

“At first it seemed like a way to help the nuns and to help me earn my badge,” said Molly, an eighth grader at Pine Grove Middle School in Carney. “I figured it would help everyone out and I’d do it until I got my badge.”

With the help of bulletin advertisements at St. Francis of Assisi and St. Joseph, Fullerton – where her Girl Scout troop is based – she quickly received enough stamps to complete her service project.

However, each week as Molly picked up the bundles of stamps worshippers at both parishes generously delivered to their respective rectories, she became fascinated with the post-marked items, some of which assured the passage of mail decades earlier from countries as far away as Russia.

Molly also earned accolades from Knights’ member John Hmelnicky, who helps organize the stamp ministry for the retired sisters, so she decided to continue her collections long after she wrapped up her service project.

“I have quite a network of people collecting these stamps for the sisters,” Mr. Hmelnicky said. “But Molly is one of my youngest contributors and definitely brings in volumes for the ministry.”

The sisters sell the used stamps to collectors and earn a modest sum to help pay living expenses for residents of the motherhouse, he said.

Some of the older and rarer stamps bring in more money, but all of them are welcomed, Mr. Hmelnicky said.

In 2006 the Perry Hall Knights sent the sisters nearly 42 pounds of cancelled stamps, much of which came from Molly’s continued interest in the ministry.
“You know this stamp thing has meant so much to Molly and it’s been an education for the entire family,” said Mary Friedel, the teenager’s mother. “Some of these stamps are 40 and 50 years old and they had been stored in shoe boxes for years.”

Some of the stamps come along with stories from donating parishioners who sometimes share details about what items the postage carried and the far-reaching places in which they originated, Mr. Friedel said.

So, for the foreseeable future, Molly said she will continue running ads in the bulletins at both parishes several times a year and depend on the generosity of the church-going public to supply rare and common stamps for the retired sisters.

“Not long ago someone gave us a 40-year-old Boy Scout (commemorative) stamp,” Ms. Friedel said. “What I thought was so funny about that was it was in the same year as the 100-year anniversary of the Boy Scouts. Things like that make the whole project so much fun for everyone.”