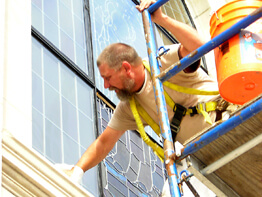 As Mark Willyard installs one of the restored 82-year-old stained-glass windows in St. Casimir, Canton, he can tell immediately the sunlight illuminates the holy image in the panel more radiantly than the religiously colored glass that has yet to be refurbished.

“It’s just amazing to see them when they come back,” said Donna Derkacz of Glen Burnie, a life-long parishioner who was baptized in the church 48 years ago. “You can really see the detail in the images.”

Last January contractors began removing each of the church’s 15 original 10-panel stained-glass windows from the building’s casings – three to four at a time – transporting them to Higgins & Associates restoration company in Front Royal, Va. where they are reinforced, cleaned, retouched, then re-installed about a month later, said Father Ross M. Syracuse, O.F.M. Conv., pastor of the parish.

As the windows are placed back into their casings, clear-laminate-glass panels are installed over top of them outside to protect the stained glass from ultra-violet sunrays, inclement weather and vandals, he said.

With only a few more windows waiting for restoration, Father Syracuse is hoping this phase of the parish’s $700,000 renovation project will be completed in time for Christmas celebrations and worship.

“This wasn’t originally done for cosmetic reasons,” he said. “The lead in the windows was so deteriorated, they were basically falling apart. The appearance now is a wonderful bonus.”

Phase two of the building’s renewal project will involve painting the interior of the church and cleaning the murals on the ceiling and in the sacristy; and phase three will entail stripping and refinishing all 88 21-foot-long pews, Father Syracuse said.
With nearly $500,000 of the money raised for the projects, he is hopeful it will all be completed by Christmas 2008.

It’s the first major renovation project – other than maintenance and patchwork – since the building was completed in 1925 and much of it is long overdue to restore the church to its former grandeur, he said.

“The (parishioners) are so appreciative of the work being done to the church and they’ve been very generous with donations to care for God’s house,” Ms. Derkacz said. “The way things are going, I’m confident the windows will be done by this Christmas and all of the work will be done by the following Christmas. The finished product will be a beautiful gift.”