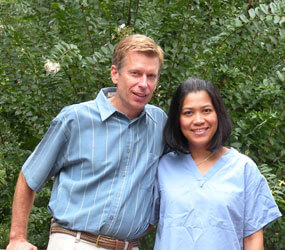 While Cita Brown calls the United States home, she has not forgotten the poorest of the poor in her native country, the Philippines. The parishioner of St. Ursula, Parkville, and her husband, Douglas, are actively involved with FAPI, the Foundation for Aid to the Philippines Inc.

FAPI aims to reduce poverty and promote self-sufficiency in the Philippines.

Founded in 1997 and based in Cockeysville, FAPI has provided grants for medical care, livelihood and nutrition projects, housing and education. Medical missions to the Philippines are vital, as proper medical care is often unavailable to the poor due to the country’s healthcare system, which requires patients to pay for their own medicine and medical supplies.

Cita, a registered nurse who works in the operating room at Union Memorial Hospital in Baltimore, went on her first FAPI medical mission to the Philippines in 2009. Douglas accompanied her on her second mission there, in late January.

She was among a team of approximately 40 medical professionals, which included eight or nine surgeons. It took the group two days to travel to Leyte, a rural area about an hour’s flight from Manila.

FAPI purchased all of its supplies – vitamins, antibiotics and surgical equipment – totaling 50 boxes. Board member and surgeon Alberto del Corro, and his wife, FAPI secretary Karen del Corro, a registered nurse, packed and shipped the supplies to the public hospital in Leyte.

In five days, the FAPI team saw more than 3,000 patients in the hospital’s outpatient clinic.

“The townspeople knew about the mission months in advance,” Douglas said. “They traveled for days to get to town – some even traveled for a week, by foot and by boat. When we arrived, we had 500 people signed up and pre-screened for surgery. Over five days, they handled 75 major surgeries.”

Because Douglas is a career consultant and not a medical professional, he handled non-medical tasks.

While the hospital staff was friendly and helpful, the conditions of the building were not acceptable by American standards.

“It was hot and unsanitary,” Douglas said. “Patients with major problems had to wait in the hallways for days. There was an orthopedic patient, his foot had been crushed. It’s really a sad situation. They can’t get medical care. If you don’t have the money, you just can’t get treated there.”

According to FAPI, more than 60 percent of the 80 million Filipinos live below the poverty level. In the metropolitan Manila area alone, unemployment is more than 30 percent.

“We were packed up and ready to go,” she said. “There was a lady who needed a C-section. The lady had been having contractions since the previous day, but she had no money to buy the IV medicines or supplies to do the surgery.

“We got to that lady just in time. She needed a blood transfusion. Her blood pressure had dropped tremendously. The baby was OK. I was praying in the OR for God to please save them. It was a real humbling experience.”

Leftover medicines, instruments and medical supplies were donated to the public hospital.

“This was my first trip with FAPI and my second missionary trip,” Douglass said. “On both trips I truly felt that I received more than I gave. The people we served were so humble in the midst of extreme, desperate circumstances.”

FAPI is already planning for its next medical mission, in November 2012.

“It takes time to raise money,” Cita said. “Most of the volunteers pay their own way, and many supplies have to be purchased. The government of the Philippines has to approve everything, and there are certain requirements for the people going on the trip. They go to a different area every time, finding the neediest towns.

“This is a real grassroots effort.”