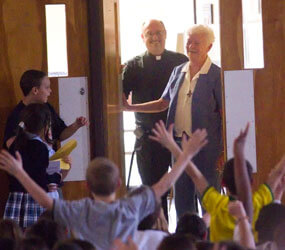 For Sister of Notre Dame de Namur Joan Kelly, a name means everything.

“It’s important in building relationships with people,” she said.

For 25 years, the principal of St. Ursula School in Parkville has successfully endeavored to know the names of each student and his or her parents.

As a result, she has become a trusted partner in education and friend to thousands of people.

Sister Joan had known for weeks that St. Ursula School was celebrating her with an April 30 event. An estimated $5,000 was raised for the school’s tuition assistance funds for struggling families.

“I said as long as it was fundraiser for the school, I don’t mind doing that,” Sister Joan said. “I said I didn’t want anything other than that. It never occurred to me there would be anything else.”

The April 29 celebration was secretly organized by the school’s staff and 650 students, and they filled the gymnasium to surprise her.

“When I walked in Friday, I got all filled up,” Sister Joan said of her emotions. “I didn’t have a clue. That got me choked up a little bit.”

A representative from each class presented her with a sunflower petal. The sunflower is a symbol of the Sisters of Notre Dame de Namur. Throughout her career, Sister Joan has taught her students to be like St. Julie, founder of her order, and treat everything in life as being good.

“If there’s anybody who embodies St. Julie, it would be Sister Joan,” said Tom Fitzgerald, who serves as chairman of the school’s development committee.

During the April 29 celebration, students performed Irish dances and played a game with her called “Are you smarter than a St. Ursula School student?”

One of Sister Joan’s guiding principles is to work with families who want to have a Catholic education for their children. Longtime friends say that Sister Joan was one of the archdiocese’s most vocal advocates for state textbook funding.

“She’s a wonderful principal,” said school secretary Bobbie Triplett. “There are so many programs and so many things that have begun under her leadership. Sister Joan has been the driving force. Everything she does is to make the whole school better.”

That loyalty was on display as 192 people came to St. Ursula April 30 on a night of light fare, drinks, music and dancing.

“It brought together my school family with my real family and my order,” Sister Joan said.

Father Hook who became pastor of the parish earlier this year, marvels at the principal.

“If she needs anything done, she knows who to call,” Father Hook said. “She knows so much. She’s such an asset, not only to the school, but to the parish.”

Upon her arrival 25 years ago, Sister Joan made developing a kindergarten a priority, and the school flourished. Sister Joan also stressed technology advances in the classroom.

“There always has to be a newness,” she said. “You have to keep moving. You’re never there. As soon as you think are, you’re not.”

“Sister Joan is always looking to the future,” Culotta said. “The children are what drive her. She wants to be in the classroom and enjoys seeing the children learn.”

Sister Joan is thankful for each day she’s at St. Ursula.