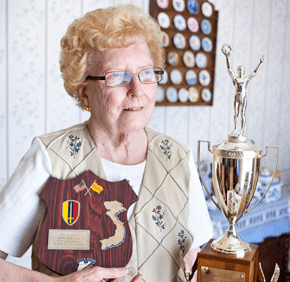 By Elizabeth Lowe
elowe@CatholicReview.org
BEL AIR – When Elizabeth Kruger recounts her military service overseas, she paints a picture so vivid it seems as if she had just gotten home.
In reality, some of her experiences occurred more than four decades ago.
A retired U.S. Army lieutenant colonel, Kruger is the first female named Maryland’s Catholic War Veteran (CWV) of the Year.
“She’s a genuine American hero,” said Gil Barker, CWV Maryland state commander.
Her two decades of service as a nurse anesthetist began in 1966. She was 17 years removed from Mount de Sales Academy in Catonsville and had several nursing jobs in her resume. The Army Nurse Reserves recruited her, but she instead chose active duty and enlisted in the Army Nurse Corps.
“They came after me,” Kruger chuckled. “I had no intention of joining.”
She was stationed at an allied forces hospital in Belgium in January 1970, when she was transferred to Phu Bai, Vietnam, where her unit supported the 101st Airborne Division.
Kruger provided CPR (cardiopulmonary resuscitation) and delivered anesthesia to wounded soldiers who often were flown the next day to hospitals in Japan, Philippines or the U.S. Sometimes, she accompanied the critically ill on helicopters to Da Nang or hospital ships in the South China Sea.
“Most of the wounded came in early in the morning in helicopters,” Kruger said. “(Sometimes) I worked day and night, straight through with causalities.”
Kruger said some soldiers had been hit by homemade bombs, with nails “peppered in their body.”
“It was terrible because they were so young, they were draftees,” she said. “They were so nice. They would say, ‘Take care of my buddy, he’s hurt worse than I am.’
Kruger still remembers a Catholic chaplain pausing to pray with five Marines over a fallen comrade.
“They all stood around his cot and said a decade of the rosary,” she recalled. “I thought I should join them but I couldn’t.”
Kruger, who attended Mass as she was able in Vietnam, shrugs off the poise she displayed during the war.
“You’re with all these other people and they’re in the same boat with you,” she said. “You were like a family. You had your meals together.”
Kruger’s family sent her copies of The Baltimore Sun, which she received about a week after the date of publication.
“We didn’t get much news of the outside world,” she said. “In the larger places, like Saigon (in then-South Vietnam; now Ho Chi Minh City), it was different.”
Kruger left Vietnam in December 1970 and returned to Walter Reed Army Medical Center in Washington, D.C., where she served three years. From there, she went to Fort Bragg, N.C.
Eight years after leaving Vietnam, she was assigned to the U.S. Army Hospital in Tehran, Iran, where a 13-month tour of duty lasted from January 1978 to February 1979. She lived alone in an apartment in Iran’s capital.
“I was the only American on my street,” she said.
Kruger attended classes about Islamic culture. She remembers learning to not mention in public the name of the Shah of Iran, and that the person who is most important or senior should pass through a door first, which oftentimes is a man.
She witnessed a revolution in Iran.
“It was almost like open warfare on the streets,” she said, of the three months of conflict she experienced. “You just couldn’t believe it was happening and you just hoped it wouldn’t go on forever.”
Helicopters that were to evacuate Kruger and other Americans never arrived. Eventually, she made it to the U.S. Embassy and then the airport, scenes she described as “pandemonium” and “mobbed.”
Kruger recalls the cheers when the jet she was finally on reached Turkish airspace, reminiscent of the denouement of 2012 Best Picture “Argo,” which depicted the Iran hostage crisis that began in November 1979.
She went on to serve at Fort Campbell, Ky., Letterman Army Hospital in San Francisco and finally Fort Carson, Colo. She retired in 1986.
Kruger, president of CWV Post No. 1841 Fitzgerald Moore Memorial Auxiliary in Aberdeen, received the state award May 16 in Ocean City.
A parishioner of St. Stephen in Bradshaw, she never married.
“I didn’t have time,” the 83-year-old said.
While overseas, Kruger kept in touch with Dolores Barker, a friend from their nursing school days at St. Agnes Hospital in Baltimore.
“She would send postcards from wherever she was,” said Barker, 82, a Havre de Grace resident. “She couldn’t say too much because of the war.”
Her son, Monsignor James M. Barker, pastor of St. Ignatius in Hickory, has known Kruger since he was a child.
“I remember the postcards,” he said. “It was pre-computer and the mail was important. I remember getting excited when Mom would get those postcards because they were from all over the world.”
Monsignor Barker believes Kruger viewed her service as a nurse as a vocation, rather than a job.
“In conversations with her, she seemed happy to bring healing to the troops, not just physically, but spiritually,” he said. “Her faith has been really important to her.”
For the holiday weekend celebrating Independence Day, Elizabeth Kruger was asked to list five stateside destinations where she has enjoyed celebrating her freedom.
1.     San Antonio
2.     Fort Bragg, N.C.
3.     Walter Reed Army Medical Center in Washington, D.C., which is now Walter Reed National Military Medical Center, Bethesda, Md.
4.     Colorado Springs
5.     Fort Campbell, Ky.
Also see:
Archbishop launches clergy assignments for 2013
Orioles pitcher Tommy Hunter successfully closes on his Catholic faith
‘Freedom to serve’ gets to the heart of the matter for everyday Catholics
PrevNext