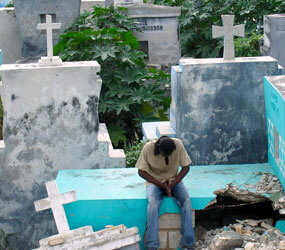 NEW YORK – Hope still exists in Haiti six months after a huge earthquake killed a quarter-million people in the Caribbean nation, according to the secretary-general for the U.N. Association of Haiti.

“The Haitians still have faith that the good Lord is still on the side of Haiti,” Harvey Dupiton said during a July 12 prayer service at St. Patrick’s Cathedral marking the six months that have passed since the temblor.

“The blow was so severe that we could still be crying out today – in anguish. But instead, many of us have turned to the task of rebuilding,” Dupiton said.

Even so, he added, “I am calling on the international community to target its assistance well so that it supports a national rebuilding plan which is inclusive of all of the country’s stakeholders, including the more than 2 million Haitians living abroad in the diaspora community.”

“On this occasion, we give thanks. Thank you to the American people and to the people of the world for your generous support to the Haitian people in the aftermath of the earthquake. We could not have dug ourselves out of the rubble if it were not for your good will, your heavy equipment, your makeshift clinics, your tons of supplies and your millions of dollars of donations,” Dupiton said.

“On this occasion, we are thankful,” he added. “Thankful for the lives that have been spared and placed on the road to recovery and success.”

“Is it a blow from which Haiti will not recover, or is there a silver lining in the disaster, a blessing in disguise for Haiti?” Dupiton asked. “Today we are here inside the great walls of St. Patrick’s Cathedral to show unwavering faith – even in the face of the loss of a dear mom, a dad, an uncle, an auntie, a son or a daughter, a cousin or grandparent, or simply a friend.”

He said it was time to take stock. “As Haitians, have we done enough for the nation during the last six months? Have those of us in the Diaspora done our part during the past six months?” he asked.

“Have we kept in mind always that Haiti is a Haitian responsibility, not an international one?” Dupiton continued. As for the nation’s leaders, he added, “are they doing all they can on the national scale to bring people of the country together as one?”