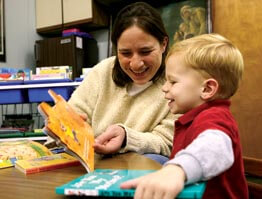 Maria “Gladys” Garcia believes the key to a good educational foundation can be found between the colorful covers of books, and she has found a corner in St. Michael’s Church where she can join other parents who read to their children.

The Catholic Community of St. Michael/St. Patrick in Fells Point established “Our Creative Corner” two months ago to introduce children to books before they reach school age.

On a recent December morning, parents and caretakers read to nine children ranging in age from 2 months to 4 years old in a room off to the right corner of the church.

A soft, colorful rug, octagon-shaped reading couch, low tables and seats, and a shelf full of children’s books written in both English and Spanish make the room, which was formerly used for the parish’s Rite of Christian Initiation of Adults class, inviting.

“It’s important for these boys and girls learn early there is so much for them in books,” said Ms. Garcia of Fells Point. “I also like that they have books in Spanish and English. My kids speak both languages, and I want them to read both languages well, too.”

Studies have shown that children who can read before they begin kindergarten, or who have had a lot of exposure to books, perform better in school than boys and girls who have limited experiences with books, said Father Robert Wojtek, C.Ss.R., pastor of the Catholic Community of St. Michael/St. Patrick.

“We’re hoping that by providing this program, we will be encouraging parents to read to their children and show them how great books can be,” Father Wojtek said. “By exposing them to books at an early age, they begin to learn about happenings around the world, about people, about other cultures. Even if they are just looking at the pictures, they are learning.”

The parish began the program after Father Wojtek was approached by members of the Urban Family League of Baltimore, who said they would provide materials to set up the reading room and train two parish volunteers to run Our Creative Corner.

He quickly enlisted the help of parishioners Monica Beltran and Marife’ Zelaya, who now supervise the parents and children in the program, which runs from 10 a.m. to noon Tuesdays and Thursdays, and conduct group reading sessions. The parish also uses the room on Sundays to encourage children to read Bible stories.

Since helping to establish the program, Ms. Zelaya of Rosedale has noticed her 2-year-old daughter, Diana, picks up books at home more often without prompting. It’s a positive sign her child will develop a love of reading, she said.

“I hope reading a book becomes the first thing my daughter considers when she is looking for something to entertain her,” Ms. Zelaya said. “You can escape into a whole other world when you read and it’s entertainment that is so much more creative than watching television.”

Though Kathleen Cahill of Perry Hall likes the exposure her three children are getting to books when she brings them to Our Creative Corner, she most likes the contact Tyler, 4, Eva, 18 months, and Megan, 2 months, have with the other children who also attend, many of whom are bilingual and have families from foreign countries.

“It’s a day for them to play with other kids,” she said. “It’s a great opportunity for them to enhance their social skills. Plus, the books here are beautiful. Much better than the ones we have at home, which are all ripped up by now.”