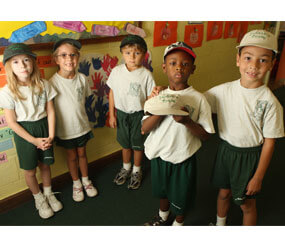 When times are tough for Jaidan Richardson, his classmates have his back.

The first-grade student at St. Michael the Archangel School in Overlea has spent the better part of the last three years suffering from Acute Lymphocytic Leukemia. As a result of intense chemotherapy treatments, Jaidan, 7, has often been out of class and lost most of his hair. His brown eyes peek out from underneath the brim of the camouflage hat he wears to tell the story of a reluctant hero.

Their innocence can only expose them to so much knowledge of Jaidan’s illness, but his classmates rally around him.

“He’s been in the hospital and sick all these years,” Brianna Becker said. “We’re helping him with these hats.”

In a sign of unity, Jaidan’s classmates wear hats around school that read “Jaidan’s Team.”

“They wear them as often as they like because Jaidan wears his hat every day,” teacher Anita Grauer said. “They’re right there with him.”

Many of his friends have been with him throughout his struggle. Jaidan was diagnosed before he entered God’s Little People, the preschool program at St. Michael the Archangel. He was in remission, but then the Leukemia returned while he was in kindergarten.

As Jaidan’s best friend, Max Gruebl, innocently put it, “he wears his hat because he only has a little bit of hair.”

“He likes to follow me and play with me,” Max said of Jaidan.

Phyllis Kepner, Jaidan’s preschool teacher, said she had been prepared for his illness and the tough task of telling students why Jaidan was missing class.

“Even though they were little and didn’t quite understand everything about his illness, they were always positive,” Kepner said. “He knew that people were thinking about him.”

“We’ve taken him (the stuffed monkey) out for recess,” Grauer said, “but we’re afraid he’ll get hurt. He’s been in the computer lab, the library, at gym, the art room and the music room. He keeps Jaidan’s seat warm.”

Jordan brings home class work, pictures and cards from Jaidan’s class, which recently prepared a basket for him that contained toys and cookies. In addition to those hands-on reminders, Jaidan is regularly in the prayers of his class and school.

For St. Michael teachers and staff, who worry about the well-being of Jordan and his classmates, the experience can be emotionally taxing.

“It’s very tough,” Grauer admitted. “You have to keep it together on days when he’s not here and they’re asking, ‘Is he OK?’ ”

Grauer said that even when Jaidan is struggling, he’s going to put on a brave face. He has everyone at St. Michael hoping for remission once again.

“Jaidan loves school,” Grauer said. “When he’s not here, he’s wishing he was. He bounces back like nobody I’ve ever seen. If he has a chemo treatment on Friday, he’s here on Monday. He doesn’t let it hold him back.”