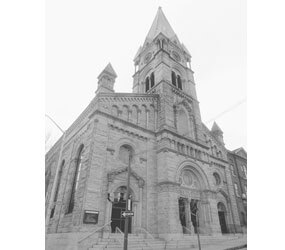 Leaders of the Redemptorists and the Archdiocese of Baltimore are considering a plan to close 159-year-old St. Michael in Fells Point and relocate parishioners to Sacred Heart of Jesus in Highlandtown.

A new bilingual, bicultural parish would be formed at the Sacred Heart site, serving Spanish-speaking and English-speaking communities.

St. Patrick in Fells Point, currently part of the Catholic Community of St. Michael and St. Patrick, would become a mission of the new parish.

Redemptorist Father Robert Wojtek, pastor of the Catholic Community of St. Michael and St. Patrick, announced the relocation plan to parishioners during weekend Masses Jan. 15-16. The proposal was also announced at Sacred Heart of Jesus.

The Catholic Community of St. Michael and St. Patrick has a very large Spanish-speaking population, while also serving English speakers. Sacred Heart of Jesus is currently an English-speaking community.

The pastor said St. Michael has been suffering from financial difficulties. Its buildings are in need of an estimated $9 million in repairs, Father Wojtek said.

“For at least the last 15 years, the Redemptorists have subsidized this parish,” he said. “We are just no longer in a position economically to continue doing that. We’re looking for the best ways to serve the people. The archdiocese and the Redemptorists are working together to try to come up with some viable options.”

Father Wojtek noted that under the proposal, a transitional council – made up of an equal number of representatives of the pastoral councils of St. Michael/St. Patrick and Sacred Heart of Jesus, would be established to help form the new parish.

Sean Caine, communications director for the Archdiocese of Baltimore, told The Catholic Review that the transitional council would make a recommendation for the name of the new parish, which would then be decided by Archbishop Edwin F. O’Brien.

“We welcome the input of the affected communities,” Caine said.

The spokesman said a final decision on the future of the parishes is expected to be made in February. The transition would happen at the Feast of the Transfiguration in August. Decisions on the future of closed parish buildings at St. Michael would be made by the Redemptorists, Caine said.

The archdiocese expects that the new parish would become the “focal point” for Hispanic ministry in the city, Caine said.

Redemptorist Father Patrick Woods, provincial leader of the Redemptorists’ Baltimore Province, said in a Jan. 17 written statement that the Redemptorists are “grateful for the great faith and support of the many people we have been blessed to serve through the years.”

“We are fully aware that it is never easy for people to lose a church that they love and in which they have formed deep spiritual bonds,” Father Woods said. “We also recognize that blending two different parish communities can be equally challenging. However, we all share the bond of unity in Jesus Christ and the Eucharist. Over time, we are convinced that this process will bring life to all the faithful of the various communities involved.”