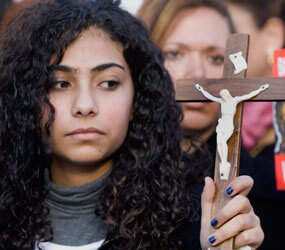 STRASBOURG, France – The European Parliament has urged governments to do more to protect Christians from persecution.

“In some cases, the situation facing Christian communities is such as to endanger their future existence – if they were to disappear, this would entail the loss of a significant part of the religious heritage of the countries concerned,” the European Parliament said in a Jan. 20 resolution addressed to European Union institutions.

“We call on the (European) Council, the Commission and High Representative for Foreign Affairs and Security Policy … to pay increased attention to the subject of freedom of religion or belief and to the situation of religious minorities, including Christians, in agreements and cooperation with third countries as well as in human rights reports.

The document said the Dec. 31 explosion at an Orthodox church in Alexandria, Egypt, was only one of numerous attacks against Christians in 2010. It cited incidents in Nigeria, Iraq, Philippines, Vietnam and Cyprus.

It added that the EU had stressed the duty of governments to guarantee freedom of thought, conscience and belief and was committed to promoting democracy and respect for human rights and civil liberties as a fundamental aim.

In called on the EU’s foreign ministers to find “instruments to provide security and protection for Christian communities under threat” when they discuss persecution at their Jan. 31 meeting.

Catherine Ashton, high representative of the European Union for Foreign Affairs and Security Policy, told the European Parliament Jan. 19 that any “discrimination or violence” because of religious beliefs violates EU values and should be “taken seriously and condemned with the same force.”

She added that the EU would not “turn a blind eye” to the plight of “long-established Christian communities in the Middle East,” and was “ready to enhance cooperation with governments to combat intolerance and protect human rights.”

“These attacks are unacceptable, perpetrated by extremists with an agenda of intolerance that must be condemned and resisted,” she said. “EU delegations closely monitor such issues around the world, and the EU’s next annual human rights report this spring will address the situation of religious minorities around the world. I am fully committed to keeping freedom of religion or belief at the top of the EU’s agenda.”