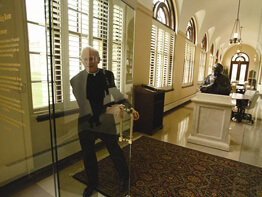 The John Paul II Reading Room features an endowed collection containing major works by the pope and on the Holocaust.

Major donors from the Catholic and Jewish communities, including Nick and Mary Mangione, Robert and Suzy Price, Richard and Barbara Fisher and Marc and Leonor Blum supported the project.

Father Robert Leavitt, S.S., president-rector of St. Mary’s, views the new room as a way of honoring the memory of the late pontiff.

“This space, with its Pope John Paul II collection, Catholic-Jewish collection and Holocaust collection, is a tribute to the new era in Catholic-Jewish relations,” said Mr. Blum. “I congratulate Father Leavitt on his vision as we move increasingly into a religiously pluralistic world.”