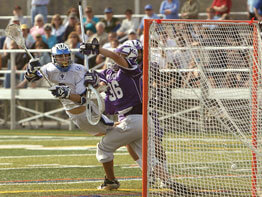 On April 18, a very special ceremony will take place during halftime of the St. Mary’s High School boys’ lacrosse game as the No. 4 Saints face the No. 3 Loyola Blakefield, Towson, Dons at St. Mary’s new turf field at St. John Neumann, Annapolis.

Richard Bayhan, principal of the Annapolis school, and members of the St. Mary’s School Board will accept a check for $165,000 representing a gift from the Royal Blue Club to cover the cost of the scoreboard at the new field.

According to a recent press release, the gift reflects a fundraising effort led by the Royal Blue Club, with the specific leadership of Ed Mullen, John Schilling and Victor Lilly. Mr. Lilly, a St. Mary’s alumnus, was responsible for securing advertising sponsors from throughout the business community.

The 2008 Saints, coached by Matt Hogan, are out to strong start in the MIAA A Conference with a 2-1 league record, 11-1 overall. Gearing up for the competitive conference, the Saints had overwhelmed their preseason opponents with a 9-0 run leading to a 2-1 league record as of April 13.

The Saints are a well-rounded club with balanced scoring and unselfish play. The team is led by senior attackmen Matt Lamon, Matt Bell and middie JP Dalton.

Another midfielder, sophomore Mark McNeill, has been extremely effective controlling the ball and the field tempo.

As of April 13, Calvert Hall, Gilman and Loyola Blakefield all remain undefeated as the season ramps up during the months of April and May.