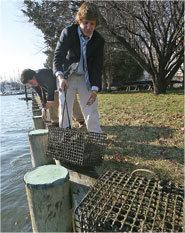 Students in the environmental club at St. Mary’s High School tend to an oyster garden.

“That sounds more attractive than it is,” joked English teacher Paul O’Hearn, who said the “garden” is actually muck-covered cages resting on the bottom of Spa Creek in Annapolis.

Each year, the club fills four wire cages with the shells from shucked oysters and spat, which are baby oysters so minute they just appear as tiny round dark spots on the empty shells. The spat implant on the shells, and they grow in the brackish water.

The club monitors them for a year. The infant oysters, about 3,000 in all, feed themselves by filtering the water.

Every two weeks, club members pull the cages out of the water and leave them out for four hours. Oysters can live about a day out of the water, but tiny parasites, such as flatworms, can’t, so while the oysters bask on the shore, the parasites die. As the oysters mature, the cages protect them from larger predators.

“They’re almost no maintenance,” Mr. O’Hearn said, adding the students enjoy pulling up the muddy and mucky cages. The oyster garden is a program of the Chesapeake Bay Foundation, and when the year is up, the oysters, now skinny and about an inch long, will be returned to the foundation to begin life as a bay oyster. The foundation plants them on a sanctuary reef, where they won’t be harvested, to help stabilize the declining oyster population. The bay’s oyster population is at only 2 percent of its historic high.

“The kids understand the bay issues,” Mr. O’Hearn said. “The trouble the bay is in – this makes it tangible.”

Mr. O’Hearn and fellow teacher Pam Demske advise the club, and they’re proud that the environmental club – through fundraisers such as dress-down days, bake sales and cell phone recycling – raised $2,300. The money was donated to the Nature Conservancy’s Adopt-an-Acre program, and that money paid for the permanent preservation of 46 acres of rainforest in Kenya, an area four and a half times the size of St. Mary’s campus.