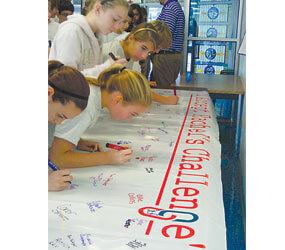 BEL AIR – On April 20, 1999, Eric Harris and Dylan Klebold approached Columbine High School in Littleton, Colo. and saw Rachel Scott sitting in some nearby grass with a friend.

Scott became the first of 13 people to be shot and killed by Harris and Klebold, who had long been victims of bullying at the school. The “Columbine High School Massacre” became seared into the American collective consciousness.

Scott was known as a kind individual who helped others. Her diary, discovered after her death, revealed how much she wanted to positively impact the world.

Her legacy lives on at St. Margaret School and Parish in Bel Air.

St. Margaret’s kicked off an anti-bullying program called “Rachel’s Challenge” Oct. 25 with a middle school session to motivate students to treat each other with kindness. A night session was held for parents and community leaders as well and it’s possible that St. Margaret could partner with local schools.

“Rachel’s Challenge” is a national program that seeks to create positive cultures in communities. St. Margaret students signed a banner promising to create a chain reaction of kindness. That will be re-enforced through a new club, “Friends of Rachel.” Forty of St. Margaret’s more than 250 middle-school students have signed up for the club.

“I’m excited for it,” said eighth grader Katie Sullivan. “It will be really fun to have a bunch of kindness going around the school like a chain.”

St. Margaret already has an anti-bullying program in place, “The bully, the bullied and beyond,” that focuses on how not to act. Principal Madeleine Hobik found the positive approach of Rachel’s Challenge attractive and in line with Catholic-Christian values.

“She promoted that throughout her life by reaching out to the disadvantaged in her high school,” Hobik said. “She made a difference.”

Because the Columbine tragedy occurred 12 years ago, most of the middle-schoolers were not conscious of the incident, even though it has loomed large over the culture, much like the Sept. 11, 2001 terrorist attacks. Although Columbine shook the country, bullying continues to be attributed as the cause of other violent acts committed by the bullied.

St. Margaret implemented “age-appropriate” video into classroom curriculum so that the children could see how events unfolded in Colorado.

“It was really emotional impacting because it was a tragic event,” Katie said. “Then, there’s the positive of Rachel and what she did, and we can follow in her footsteps and continue it.”

Her classmate Julia Haigley said “It shows how big of a problem bullying really is and it kind of made it real for us and how serious it can hurt someone. I think Rachel was meant to do what she did and God sent her to do that.”

School counselor Martha Sullivan said classroom discussions will include topics such as integrity and honesty. Students will watch tone-setting videos that encourage them to embrace good values. Through the additional curriculum, school officials believe students will be better equipped to spot subtle and overt bullying.

“It’s all about kindness and if you’re being kind to someone, there’s no room for bullying,” Sullivan said.

For more on this story and to listen to students talk about the program, visit CatholicReview.org/Palmerblog.