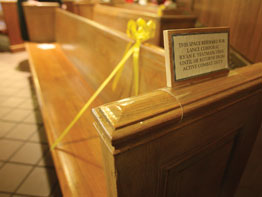 U.S. Army Lt. Lynette Jefferson may be serving thousands of miles away in Iraq, but she is certainly present in the hearts and minds of the parishioners of St. Luke, Edgemere.

That’s due in part to a project of St. Luke’s church council, which reserves spaces in pews to honor parishioners deployed on active duty in the U.S. military. The church currently has spaces reserved for two of its parishioners, Lt. Jefferson and Lance Cpl. Ryan Yeatman, U.S. Marine Corps.

“It’s a way to let young people know that we care about them even though they are separated from the church,” said St. Luke parishioner Jack Dabrowski.

The reserved seats are located on the left side of the church toward the back. A plaque with the name of the parishioner marks the space in the pew, which is also draped with a yellow ribbon. The plaque states that the space will be reserved until the parishioner returns home safely.

An army chaplain for 22 years, Father Lizor said he “spent a good many years overseas.”

“I appreciate very much what military people do with their lives,” he said.

She said when her daughter was about to leave for Iraq, the Jefferson family asked the church to pray for her, announcing that she was going overseas. The family was then approached by ushers asking if they could reserve a seat for her.

“[Lynette] was almost in a daze like, ‘Wow, somebody would do this for me,’” Mr. Dabrowski said.

“I thought it was a nice gesture,” said Ms. Jefferson, explaining that the family was allowed to pick the space to be reserved for Lt. Jefferson. “We picked the last place she sat before she left.”

Lt. Jefferson shared her gratitude for this gesture in an e-mail: “I am very grateful that the St. Luke’s community reserved a seat for me while I am deployed here in Iraq. I am thankful that the church appreciates the sacrifices that military service members make.”

“During Christmas, I received several cards from members of the St. Luke’s church,” she said. “It felt nice that individuals would take the time to do this.”

Lt. Jefferson said she misses her family and friends but enjoys the work she is doing in Iraq to train the Iraqi Police. “This is not only helping them sustain themselves but the local community as well,” she said.

Mr. Dabrowski said frequent notices in the church bulletin ask for news of any other parishioners who have been deployed.

He said these parishioners’ returns will be celebrated. “Their first Mass back, we would like them to take their reserve signs up and give them to Father,” he said.

Mr. Dabrowski’s wife, Lynn Dabrowski, echoed her husband’s regard for deployed parishioners. “They are absent from the body of Christ but present in our hearts and minds,” she said.