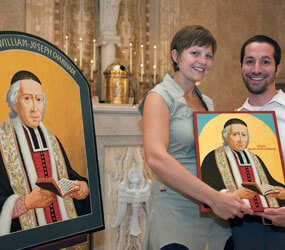 ST. LOUIS – Rachel Lozano sometimes feels a sense of disbelief that she could owe her life to a miracle.

After suffering three bouts of a rare form of sarcoma, a cancer that affects the connective tissue, the 27-year-old has been cancer-free for the past six years.

Her survival is being attributed to the claim of a miracle through the intercession of Blessed William Joseph Chaminade, founder of the Society of Mary, also known as the Marianists.

On July 16, the St. Louis Archdiocese and the Marianists closed their canonical investigation into the alleged miracle. The findings from that investigation will be presented to the Vatican Congregation for Saints’ Causes.

If declared an authentic miracle, it would be the final step needed for Blessed Chaminade’s canonization.

That leaves Lozano with “an amazing feeling.” She said the experience has strengthened her faith as a Catholic.

Lozano’s first diagnosis with cancer was in December 1998. She was 15 and a sophomore at St. Joseph’s Academy in Frontenac. Doctors discovered it was an Askin’s tumor, a rare, malignant cancer affecting the chest wall. She had emergency surgery, followed by chemotherapy and six weeks of daily radiation.

Lozano recalled the generous support she received from family and friends. Members of her parish family at Our Lady of the Pillar in Creve Coeur volunteered to bring meals to the house. Her doctor, Robert Bergamini, and the staff at the Cardinal’s Kids Cancer Center in Creve Coeur took a holistic approach to her illness, including the art therapy sessions that inspired Lozano to pursue the subject for a master’s degree in the fall.

In 2001, the cancer came back, this time in her bone marrow. Intense chemotherapy in the first half of 2001 forced her to miss the second half of her senior year. That June, doctors recommended an autologous stem-cell transplant, which meant stem cells from her own body would be used to treat her cancer.

The procedure almost killed her. She spent months afterward recovering. “I pretty much had to learn how to eat and walk again,” she recalled.

In November 2002, doctors discovered a tumor had reappeared, this time in the area of her heart, lungs and spine. It was about the size of a small Nerf football, Lozano said.

Doctors told her no one had survived a relapse of an Askin’s tumor cancer after a stem-cell transplant. They said she would live “a few weeks, maybe a few months max,” she said. But after a year, tests showed the tumor had “little to no activity.” A second scan was ordered a month later, which showed the same results.

“I kept living and I was active,” Lozano recalled in an interview with the St. Louis Review, the archdiocesan newspaper. “They thought it was strange the whole time. They really didn’t expect me to make it.”

In May 2004, Dr. Mark Blucher, a well-known surgeon who had just moved from the East Coast to St. John’s Mercy Medical Center in Creve Coeur, removed the tumor.

During the treatments, Lozano was one of two teens from her parish chosen to fly to Rome for the September 2000 beatification of Father Chaminade. The cure of an Argentine woman’s lung cancer had been attributed to his intercession.

Lozano, who knew of Blessed Chaminade from growing up in a Marianist parish, said she felt an instant connection to the French priest, who died in 1850. “I started praying more” after the experience, she added. “I left feeling very peaceful.” Family and friends stepped up their prayers for her health, specifically asking for Blessed Chaminade’s intercession.

After the group returned from Rome, Marianist Father James Tobin, pastor of Our Lady of the Pillar, noticed Lozano’s improvement in health, leading to questions about whether Blessed Chaminade truly could have interceded. The priest wrote his superior general at the time, Father David Fleming. They decided to formally look into whether a miracle could have happened.

Because the alleged miracle took place within the boundaries of the archdiocese, the Marianist community contacted St. Louis Archbishop Robert J. Carlson to open an investigation.

Monsignor John Shamleffer, judicial vicar for the archdiocese, explained that the process for investigating an alleged miracle has a prescribed course, as defined by the Vatican saints’ congregation.

In April, a six-member tribunal was formed, including canon lawyers and medical experts with no ties to Lozano’s treatment. Monsignor Shamleffer, who served as the episcopal delegate on the tribunal, said numerous individuals had been interviewed over the course of several months, including family and friends who prayed for her and the physicians who treated Lozano.

Monsignor Shamleffer said the purpose of the investigation, which ended with an evening vespers service at Our Lady of the Pillar, was to “certify everything and attest to the truthfulness of the witnesses and the process. The information is then sent to the congregation, and they make the determination of whether or not this is a miraculous cure.”

It’s not clear when the Vatican will make a decision, he said. “The last time our archdiocese had this happen was in the 1880s, so we really don’t have experience in how long this process takes.”

The priest called the experience one of “grace and prayer. I think it’s a wonderful faith experience to believe that God works in these miraculous ways. It’s a source of joy and faith, both for this young woman, for the Marianist community, for the parish, the archdiocese and the whole church.”