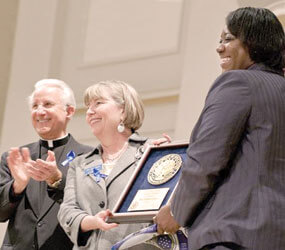 The school community was scheduled to celebrate being awarded the U.S. Department of Education’s Blue Ribbon of Excellence back in February, but winter weather canceled the party.

By April, not even a potential tornado was going to stop the good times.

“Today,” Weiss said, “we celebrate the recognition of St. Louis School’s long history of excellence. We do so with a profound sense of gratitude for all who have come before us, built the foundation and first established the excellence recognized in the awarding of the national Blue Ribbon.”

St. Louis was named a Blue Ribbon School last fall, becoming the fourth Catholic school in the Archdiocese of Baltimore to receive the honor during the last three years. It was the only one honored in 2010.

St. Louis was one of 314 nationwide schools, including 50 private schools, chosen for the Blue Ribbon honor. Seven were from Maryland.

Auxiliary Bishop Mitchell T. Rozanski celebrated a Mass before the April 28 ceremony. During his homily, he said the school community must not rest on its laurels as it moves forward, but strive for greater things.

“What it means is we’ve set a high standard, a great standard of excellence,” Bishop Rozanski said. “All that we do here at St. Louis School is to help us prepare for life, for those times ahead, for what we hope to be in life and what we hope to do to serve others.”

Anthony Comberiate, who had children in the school from 1981 until 2010, said the school “was everything I could want as a parent.”

Monsignor Joseph L. Luca, pastor of St. Louis, offered an invocation that touched on the history of St. Louis School, which opened in 1923. The shepherd of the 4,800-family parish recognized the presence of Holy Union Sister Mary Catherine Duerr, St. Louis’ former principal.

“We follow in the footsteps of many who have gone before us,” Monsignor Luca said during the prayer.

Aba Kumi, director of the U.S. Department of Education’s Blue Ribbon Schools Program, presented the award to Weiss and praised the work of teachers.

“Thanks to their hard work each and every day,” Kumi said, “they’re helping you all unlock your potential and develop habits that will serve you for a lifetime.”

Lieutenant Governor Anthony G. Brown, who has a five-year-old son in an Archdiocese of Washington school, apologized that St. Louis was not invited to a Maryland celebration of the 2010 Blue Ribbon public schools.

“That’s why I’m so excited to be with you here to celebrate today,” Brown said. “I can promise you … that every year, henceforth, starting next year, we are going to invite our private schools to join the public schools when we celebrate our Blue Ribbon Schools across the state.”