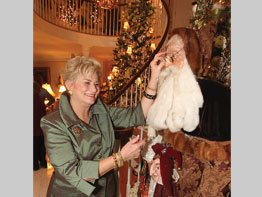 Nine elves climbed all over the scrolled iron chandelier in Norma Hoff’s kitchen, and in Tom Hoff’s study, Christmas lights illuminated the surrounding red, white, and blue ornaments on a patriotic-themed tree.

A collection of Santas stood on the side table in the family room, and 60 years of “Santa & Me” photos were displayed in the garden room, near an all-white Christmas tree surrounded by white poinsettias serving as the tree skirt.

In every room were visitors – hoards of visitors – “ahhing and oohing” as they viewed the first Home for the Holidays decorator showhouse hosted by the Hoffs. The St. Louis, Clarksville, couple opened their home Dec. 11 to fundraise for Resurrection-St. Paul School, Ellicott City, where their twin grandchildren, Morgan and Tommy Ruddo, are first-graders. Daughter Kelly Ruddo helped to organize the event with other school parents.

Those touring during the rainy day wore white surgical booties to keep the wet leaves outside while inside they easily lost count of the number of Christmas trees and Santas positioned throughout the 19-room, 9,800-square-foot brick home.

Every nook and cranny was lavishly decorated, with flair and creativity naturally, since Mrs. Hoff is an interior decorator and the proprietor of Country Charm Interiors.

“This whole house is her canvas,” said Kathleen Litchfield, her landscaper and friend.

Volunteer “docents” stood ready in each room with a short spiel about the Christmas display, offering tidbits about accessories, design, and selected pieces of furniture.

Outside, faux deer leapt through the backyard in formation, and a train tooted along the tracks through the garden, oblivious to the rain.

Deidre McCabe, a parent of two Resurrection-St. Paul students (and two alumni) thought the decorated house was fabulous. “It’s gorgeous,” she said from a cushioned chair next to the patriotic tree where she acted as docent. “It’s out of the box.”

Two hundred tickets were presold through the school, and an approximate additional 200 visitors dropped in to pay the $10 per person at the door. Donations beyond ticket sales were accepted as well.

“People love to see how people live,” said Pamela Turnbull, of Bright Ideas Interior, and a St. Joseph, Fullerton parishioner, who slowly walked through the many rooms to admire the immeasurable meticulous accents, such as the old-fashioned striped ribbon candy in a dish, which Mrs. Hoff selected to create such a Christmas wonderland.

To view the seasonal detail was enough work in itself, yet to physically create the vision is certainly another story. Why does Mrs. Hoff do it?

“I just love it,” she said. “I love pretty things, ever since I was a little child.” Several days before, the Hoffs had hosted a 100-guest party. A crew helped to carry, unpack, and set up the adornments, which amounts to 45 years of collecting.

The common question whispered throughout the elegant rooms was, “Where do they store all of it?” In a huge basement was the answer, in a methodical system of bubble wrap and labeled boxes.

Because of the overwhelming response – and that was only with planning commencing in September said Mrs. Hoff – the decorator showhouse fundraiser for Resurrection-St. Paul School will be repeated in 2009. Mrs. Hoff plans to elaborate the event to include corporate sponsorships and more.

The approximate $5,000 raised Dec. 11 will be used for purchases for special subject areas such as the library, music room, art and physical education programs, and the computer lab.