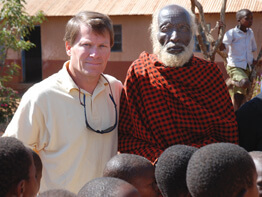 Malaria is among the maladies adversely affecting the quality of life in Tanzania.

Seven members of St. Joseph Medical Center, Towson, are among a humanitarian team, the hospital’s Village Wellness Program, that is preparing to address that medical crisis. They will depart Oct. 25 for the nation in East Africa, and spend more than a week in the Karatu district, distributing 62,000 insecticide-treated bed nets in 21 villages.

“It’s not a cure, but at this point the nets are the most effective way to stem the spread of malaria,” said Anthony LaPorta, a retired lab director at St. Joseph who coordinated the mission.

Mr. LaPorta arranged to purchase the nets from a textile manufacturer in Karatu, compounding the mission’s impact by aiding the local economy.

“The poverty among the Tanzanian people is unbelievable, compared to the American standard,” said Dr. Gail Cunningham, the head of emergency medicine at St. Joseph, who is making her third trip to the nation. “The children are excited to get a pencil, even though they may not have any paper to write on.

In addition to Dr. Cunningham and Mr. LaPorta, the mission includes John Tolmie, the CEO of St. Joseph. Its staff raised $21,000 toward a mission that is being funded primarily by a $300,000 grant from Catholic Health Initiatives, the parent company of St. Joseph.

The 16-person party includes Leonor Blum, a history professor at the College of Notre Dame of Maryland, and five staffers from Mercy Regional Medical Center in Durango, Colo.

Malaria kills 1 million annually, and 90 percent of the cases of the disease occur in Africa.