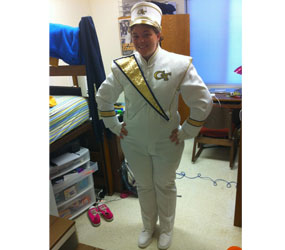 Sarah Markiewicz was sitting on her living room floor a year ago when her father, Jeff Markiewicz, noticed that one of her shoulders seemed to be sticking out.

An X-ray confirmed Markiewicz’s suspicions. The bones in his daughter’s back were indeed crooked – a result of scoliosis that so badly affected her spine and ribcage that her internal organs had shifted five percent.

“The curvature was progressing so much that it would have affected her breathing and she would not have had a normal life,” said Dr. Paul McAfee, chief of spinal reconstructive surgery at St. Joseph Medical Center in Towson.

“We loosen the ligaments of the spine until we get the spine as straight as possible,” McAfee explained. “The rods hold it straight and then we put bone graft over the back of the spine so it fuses in that straight position for the rest of her life.”

Two weeks after the surgery, Sarah was already swimming. Her posture improved dramatically, with two inches added to her height. The graduate of Towson’s Notre Dame Preparatory School is walking five miles a day and has joined the marching band at her college.

“I feel so much better,” said the 18-year-old freshman aerospace engineering student at Georgia Institute of Technology in Atlanta. “If anyone is considering this surgery, I really can’t stress enough that they should just get it done. It makes your life so much better.”

When Sarah underwent the procedure, specialists used a spinal cord monitoring system to make sure there were no changes in blood supply to the spinal cord or kinking of the nerve routes.

“We stimulate nerves in feet and hands and measure the electrical signals along the spinal cord five times a second,” McAfee said. “If there were any problems, we would have picked it up immediately and fixed it. That’s why we were able to straighten her spine completely.”

Scoliosis is seven times more common in girls than boys, according to McAfee. Those who suspect they may have spinal curvature should consult a physician, he said. In some cases, braces may be used to prevent the progression of a curvature in growing children. In others, surgery may be the better option.

McAfee said it’s important to catch the condition early. That’s why schools in Maryland conduct annual scoliosis screenings. Although Sarah underwent screenings, her condition was not detected until her late teens.

“Every year that you wait makes the correction more difficult,” McAfee said, noting that in patients with scoliosis, the spine typically curves one degree per year.

Jeff Markiewicz, whose family worships at Our Lady of Fatima in Baltimore, said that if his daughter did not undergo surgery, by the time she was in her 50s her spine would likely have curved to the point that her face would be facing the ground.

“It’s a medical miracle,” he said.