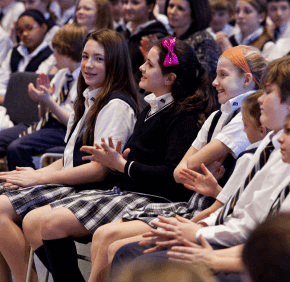 By Elizabeth Lowe
elowe@CatholicReview.org
Twitter: @ReviewLowe
St. Joseph School in Cockeysville, St. Margaret School in Bel Air and St. Mary’s Elementary School in Annapolis were named National Blue Ribbon Schools Sept. 24 by the U.S. Department of Education.
It is the first time three schools offering kindergarten through 8th grade in the Archdiocese of Baltimore have received the distinction in the same year.
The National Blue Ribbon Schools award is the highest academic honor bestowed by the education department, recognizing public and private elementary, middle and high schools where students perform at very high levels or where significant improvements are being made in students’ levels of achievement.
Eleven Maryland schools were recognized this year. St. Joseph, St. Margaret and St. Mary’s were the only non-public schools within the boundaries of the archdiocese to receive the honor.
The schools will be recognized at a ceremony in Washington, D.C., Nov. 18-19, and will receive a plaque and flag signifying their status.
Terrance Golden, St. Joseph’s principal, called the award “a celebration all about the students’ achievements.”
At a Sept. 24 school-wide assembly, Golden said he compared the Blue Ribbon to the Super Bowl. He explained students are the players and coaches include parents, teachers, staff and the St. Joseph Parish community.
“I (told) them how it’s all about their success,” Golden said. “The faculty and staff set the standards high and the children have not only reached those standards, but go above and beyond. It’s really about the teamwork of all of those groups working together to put forth the best team we can.”
St. Joseph enrolls 296 students.
Madeleine Hobik, St. Margaret’s principal, is “humbled and honored” to receive the recognition. “We are giving thanks to God,” she said.
While St. Margaret, which has 635 students, has been “competitive with our standardized test scores and consistent for many years,” Hobik said students’ service to others distinguishes the school.
St. Margaret teachers received blue carnations Sept. 24. Additional activities are planned, including a blueberry muffin breakfast and decorating the elementary and middle school campuses with blue bows and blue and white balloons.
Rebecca Zimmerman, principal of St. Mary’s, said receiving the Blue Ribbon distinction “really is a school recognition, across the board.”
She praised students and faculty for their hard work.
“We have highly qualified and dedicated faculty,” she said. “It is the students’ achievement on standardized tests. They have performed at exemplary levels. We pride ourselves in the academic excellence, coupled with spiritual life.”
Balloons and banners will be hung at St. Mary’s, where celebratory events were to include an out of uniform day Sept. 25. St. Mary’s has a current enrollment of 830.
“I am extremely proud of these three schools, whose accomplishments reflect the commitment to excellence of their teachers, students and parents and of all Catholic schools in the Archdiocese of Baltimore,” Catholic Schools Superintendent Dr. Barbara McGraw Edmondson said in a statement.
“Our schools today continue to build upon the outstanding legacy of Catholic education that began over 200 years ago by providing an academically-excellent, faith-based education and an unparalleled foundation for every child they serve.”
St. Joseph, St. Margaret and St. Mary’s were among 286 across the U.S. to be recognized, 236 public and 50 private schools.
In its 31-year history, the National Blue Ribbon Schools Program has bestowed the award on nearly 7,500 of America’s schools.
“Excellence in education matters and we should honor the schools that are leading the way to prepare students for success in college and careers,” U.S. Secretary of Education Arne Duncan said in a Sept. 24 news release. “National Blue Ribbon schools represent examples of educational excellence, and their work reflects the belief that every child in America deserves a world-class education.”
The following Catholic schools in the Archdiocese of Baltimore have received Blue Ribbon status:
Mercy High School, Baltimore, 1984-85
Notre Dame Preparatory School, Towson, 1984-85 and 2012-13
Calvert Hall College High School, Towson, 1984-85 and 1988-89
Loyola Blakefield, Towson, 1986-87
St. Rita, Dundalk, 1986-87
Archbishop Keough High School, 1987-88
Mount St. Joseph High School, Irvington, 1988-89
Trinity School, Ellicott City, 1989-90 and 1998-99
Archbishop Spalding High School, Severn, 1992-93
The John Carroll School, Bel Air, 1995-96
St. John the Evangelist, Severna Park, 2008-09
Resurrection-St. Paul School, Ellicott City, 2009
St. John School, Frederick, 2009-10
St. Louis Catholic School, Clarksville, 2010-11
St. Augustine School, Elkridge, 2012-13
Source: Archdiocese of Baltimore
For more articles on Catholic education, click here.
PrevNext