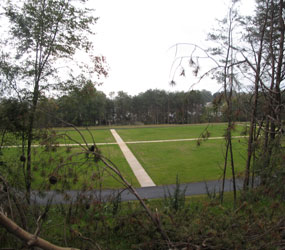 Saying the parish was providing gateways to God’s eternal life, Bishop Mitchell T. Rozanski blessed a massive expansion of St. Joseph in Fullerton’s cemetery and the addition of new church doors Oct. 1 during a Mass.

Bishop Rozanski said during his homily that the cemetery is a reminder of the call to care for those who have gone before us.

The cemetery and door projects took many months to complete, but were a reflection of the parish’s relentless drive, said Monsignor Kevin T. Schenning, pastor of St. Joseph.

“I want to thank you for your help and your prayers,” Monsignor Schenning said. “You make a difference. It’s through your prayers, support and generosity that these things happen.”

Work was completed on the six-section, nearly five-acre cemetery expansion in August, and it will be home to 3,268 graves behind the church. It nearly doubles the size of the cemetery, which has existed since the 1850s.

“We knew there was definite need for a Catholic cemetery because there are so many that are sold out,” said Joyce Thaler, director of St. Joseph’s cemetery management. “Father Kevin said ‘Let’s start looking into it.’”

The parish has sold 250 spots in its new Resurrection section of the expansion since July. Appointments for potential gravesites are already scheduled through December.

“We estimate it will take 12 to 15 years before it fills up,” said Thaler.

Monsignor Schenning has gifted a lot in the new St. Edwin section of the cemetery to Archbishop Edwin F. O’Brien, apostolic administrator of the archdiocese.

The existing cemetery was sold out in 2005, necessitating a wait list.

The Archdiocese of Baltimore offered clearance to begin the expansion work in 2009 and Baltimore County followed in 2010.

The architect of the project was Douglas Kennedy of KCW Engineering and contracting was done by Comer Construction of Bel Air. Thaler said particular praise must be given to John Berg, St. Joseph’s facilities manager, who maintains the cemetery, which continues a tradition of the parish lovingly serving the community.

“The fact that our cemetery dates back to the 1850s and you’ve got two, three and four generations here, you want to be here,” Thaler said.