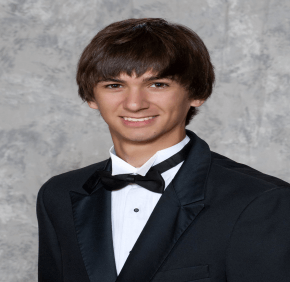 By Elizabeth Lowe
elowe@CatholicReview.org
Twitter: @ReviewLowe
Chris Pliszak credits his years of Catholic schooling with instilling in him values he will carry through life.
“It’s helped me learn about my own faith and the history of Christianity,” said Pliszak, who attended St. John Regional Catholic School in Frederick before St. John’s Catholic Prep in Buckeystown. “It’s helped me get my own set of values that I’m going to be taking to college and using for the rest of my life. It keeps me in check between having fun and playing sports.”
Pliszak, who graduated from St. John’s May 24, was the school’s co-salutatorian and one of 60 seniors – three from each of the 20 Catholic high schools in the Archdiocese of Baltimore – honored by the Department of Catholic Schools at the 21st Distinctive Scholars Convocation April 23.
“Academics are my strongest side and it meant a lot to see all the hard work pay off,” Pliszak said.
The 17-year-old, who took advanced placement and honors courses and graduated with a nearly 4.3 GPA, is a National Honor Society member.
The parishioner of St. Peter the Apostle in Libertytown will head in the fall to Cornell University in Ithaca, N.Y., where he plans to major in physics or a math-related field. He is considering a career as an astrophysicist and aspires to work for NASA.
“He is the type of student I talk about with prospective families,” said Christopher Cosentino, principal of St. John’s. “He is definitely a leader among his classmates. He epitomizes what we want in our students – his commitment to academics, athletics, being helpful to others.”
Pliszak ran on the Vikings’ cross country team throughout high school and on the track team his sophomore, junior and senior years.
He also played junior varsity basketball his freshman and sophomore years, junior varsity lacrosse his freshman year and varsity lacrosse his junior year.
Pliszak, a captain of the cross country and track and field teams his senior year, took up running at St. John’s.
“Initially I decided to run cross country to stay in shape,” he said. “I liked it a lot –it became one of my favorite sports. I ended up liking it more than basketball and lacrosse.”
For the past couple of summers Pliszak has volunteered as a referee at a summer basketball camp at St. John’s.
He credits his busy athletic schedule with keeping him focused on his studies.
“If you’re working before practice, you have a lot less to do afterward,” Pliszak said.
“He’s very genuine, always smiling, always willing to help out,” said Silas Cheung, athletic director and basketball coach at St. John’s. “He’s what St. John’s stands for.”
Chris Pliszak
St. John’s Catholic Prep
Senior
Credentials: Parishioner of St. Peter the Apostle in Libertytown; co-salutatorian, Distinctive Scholar, member of the National Honor Society; ran cross country and track, also played basketball and lacrosse; will attend Cornell University
Also see:
Bishop Walsh senior keeps focused
Catholic High sophomore’s involvement keeps her on her toes
Cristo Rey senior grows in faith
St. Frances Academy junior running full steam ahead
St. Mary’s senior shares his faith
Mercy senior makes waves overseas
IND senior is committed to service
Mount St. Joseph senior is a team player
Mount Carmel senior is a faith leader
Goretti senior keeps involved
Quick turnaround for Spalding senior
Loyola junior sets example for peers
Seton Keough senior takes the cake
Calvert Hall’s Grace upholds family name
Copyright (c) May 31, 2013 CatholicReview.org
PrevNext