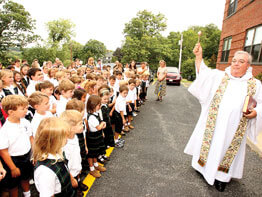 As she stood with her daughter, Sherry Ruckowicz, and 3-year-old grandson, Devin, in the back of St. John the Evangelist in Hydes, pride and memories overwhelmed her.

They had been chosen to escort the gifts for the parish school’s Aug. 29 opening Mass – an occasion that would start its yearlong 150th anniversary celebration.

Devin joined his sister, McKenna, a third-grader, as the third generation of his family to walk the hallways of St. John the Evangelist School when he started pre-kindergarten Sept. 2. His mother, Mrs. Ruckowicz, had attended the school in the 1970s, while her mother, Mrs. Kilby (nee McDaniel) graduated in 1960.

“It was very humbling,” Mrs. Kilby said. “I never imagined when I was here that this many years later I would be back with not only my child, but my grandchild. I don’t know how to express how good that made me feel.”

Legacy is a theme for the school, which sits on rolling, rural hills in northeast Baltimore County.

“Even alums who don’t have children come back and say, ‘Can I look through the school?’ ” Jean Delcher, principal, said. “We’ve been around so long; there are a lot of people the school has touched. It’s been this close-knit community because it’s out here in the country. This was the center for all of the social activities.”

Emotions ran high and reminiscing was plentiful for alumni, former teachers and the school’s 257 students as they joined current faculty and families for the Mass. Afterward, they processed to the school building for a re-dedication by the pastor, Father William F. Franken.

“Lord God almighty … we rededicate St. John the Evangelist School to the education of your people, to the progress of the archdiocese and to learning,” Father Franken prayed.

The school began as a one-floor building in 1858, when James Buchanan was president. It twice closed due to financial troubles, most recently in 1923. It reopened in 1947 under the direction of the School Sisters of Notre Dame, who taught there through the 1990s.

Sister Magdalita Wyczalek, 94, who taught there from 1987-98, was among those celebrating the 150th anniversary of the school’s founding.

She said that St. John the Evangelist remains near to her heart because of strong faculty bonds and the commitment to education.

“I love this school,” she said. “I did different things, whatever they needed. Of course I love children, so that was the main thing.”

Mrs. Delcher, in her 18th year at the school, was the first lay person to direct the school since its 1947 re-opening. She said that Sister Magdalita and the other School Sisters of Notre Dame provided invaluable advice.

“She would just come and share her stories,” Mrs. Delcher said. “The stories helped me out, and I hope that I will be able to do that for the people coming behind me.”

Beatrice Watson taught eighth grade at the school for 26 years before retiring in 1989. Although she marveled at the 150th anniversary rededication activities, Mrs. Watson limits her visits to St. John the Evangelist because of the poignancy that comes with recognizing former pupils at Mass.

“I see some of the kids and I just start bawling like an idiot,” she quipped. “They are so close around here.”

Mrs. Ruckowicz, a teacher herself, said the emphasis on the Gospel and morals is what keeps the school vibrant and the family traditions alive.

“I didn’t just pick the school because of the heritage,” she added. “I wanted to make sure that the school was up to my standards, and it passed with flying colors. It’s such a nice family atmosphere.”