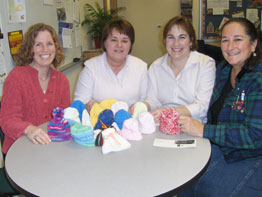 Avid knitter Joan D’Loughy has made hats, scarves, baby sweaters and other simple projects in the five years since she took up the hobby. However, when she discovered that she could use her knitting skills to help babies in need, she cast on once again – this time for charity.

This past October, the fourth-grade teacher e-mailed her co-workers at St. John Regional Catholic School in Frederick to see if anyone else was interested in knitting hats for the “Knit One, Save One” campaign.

An initiative of Save the Children and the Warm Up America! Foundation, the campaign collects handmade baby hats, which are then distributed to newborn health programs across the world. The campaign is part of a humanitarian effort to help the 4 million newborns who die from treatable and preventable diseases in Third World countries each year, according to a Save the Children press release.

“I knew we had several teachers in the building who enjoyed knitting, and I knew they would like to do a charity project,” Ms. D’Loughy said.

Second-grade teacher Carol O’Neel, fourth-grade teacher Geri Gramil, and computer teacher Lisa Giacco all responded, knitting hats for infants in need. The teachers received some extra help from Ms. O’Neel’s daughters and Elizabeth Bracey, whose daughter is a fourth-grader at the school.

Collectively, they knit 21 hats and attached a gift tag to each before mailing them in December. They were among thousands of people across the country who sent in hats.

According to a press release, the “Knit One, Save One” campaign had collected more than 30,000 handmade baby caps by Dec. 23, and knitters had until Dec. 31 to submit hats.

“It was very satisfying. I was very happy that our teachers were willing to donate their time,” Ms. D’Loughy said, especially during such a busy time of year. “It was very kind, and it showed the kind of teachers we have here.”

Jean Wright, director of development/admissions at St. John Regional, said that even though it wasn’t an official school project, the teachers set a good example for their students.

“They did something for the world community,” Ms. Wright said.

As part of the campaign to help infants, Ms. D’Loughy also sent a letter to President Barack Obama encouraging him to take action to help babies survive.

The teacher said she will consider doing the project again in the future.

“It gave us a lot of satisfaction,” Ms. D’Loughy said, “knowing we were helping these children.”