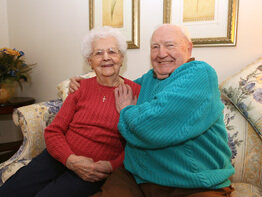 When Stephanie “Stevie” Richards told her new husband to wash the dishes, he responded that it was not a man’s job. “In this house it is,” retorted the bride.

The young girl’s stance may have been somewhat brazen for the year 1933, but Mrs. Richards knew she had married a pampered young man spoiled by five sisters and a doting mother.

The couple never did purchase an automatic dishwasher. “It was him,” she said.

When Mrs. Richards first met Bernard “Ben” Richards, she said she didn’t like him. “He looked like a snob.” Yet their childhood friendship growing up on Peckham Street in Buffalo, N.Y., ultimately hatched into love after a two-year courtship.

“She was chasing me all along,” laughed Mr. Richards, but his wife remembered otherwise. “If I went out, he’d be waiting for me when I came back,” she said, “But he never got smart with me because I had seven brothers!”

A recall of their wedding revealed it as an at-home event with dancing downstairs and food upstairs in separate apartments where each lived with their families. The young couple’s parents knew the local undertaker who provided the limousine.

Cash totaled $90 from 50 guests. “We could’ve done better,” laughed Mrs. Richards, but after all, it was the depression. As a factory worker, the groom earned merely $14 weekly.

The lovebirds’ affection holds strong nearly three quarters of a century later. Deemed the longest married couple in the archdiocese, the 92- and 96-year-old will be recognized during the Feb. 11 World Marriage Day Mass in the Cathedral of Mary Our Queen, Homeland.

Their parents’ longevity in love deeply impressed daughter and son Pat and Bob Richards. Pat (Richards) Rafferty has been Dan Rafferty’s wife for 47 years. They are parishioners of St. John, Westminster, as are her parents. Her brother has been married for 38 years.

“Believe it or not, I have never heard them raise their voices or argue,” said Mrs. Rafferty, 69. “Mom and Dad have always communicated. They were two people as one. They are such a beautiful example of love and sharing.”

Still functioning as one, the Richards dwell in an assisted living home in Hampstead. Each night they play rummy. “He’ll cheat every once in a while,” the white-haired Mrs. Richards said with a gleam in her bright eyes, a gold crucifix dangling at the neck of her red sweater.

She joins fellow residents periodically for excursions to the mall, bowling alley, or bingo. In the spring, she nurses tomato plants and flowers on the deck. Mr. Richards, whose memory is faltering, possibly from a few strokes or old age, prefers to read the newspaper, watch television, or nap.

“That’s how you stay away from trouble,” he joked with a handsome smirk as he hobbled away on his cane headed for his afternoon rest. Looking over a green-sweatered shoulder, he nodded to his bride. “I’ll see her later,” he said, “and I’ll give her two kisses. It’s a good thing I have this girl to take care of me. My girl is beautiful.”

With manicured fingers leaning against her face, Mrs. Richards beamed, the enduring love apparent in her eyes. Her one-word answer for what kept them married this long was simple – love.