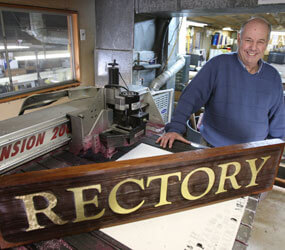 Late in 2009, Monsignor James M. Barker noticed that one of the parish signs at St. Ignatius, Hickory, had been vandalized. He placed a call to Gardenville Signs’ owner Conley Reems about getting a replacement.

“He had already done it,” the pastor said of Reems, who is also a parishioner. “He’s a wonderful man. He’s at Mass every weekend and takes a lot of pride in St. Ignatius parish. When the parish opened their new church (in 2001), Conley donated all the signage for all the property. We’ve gotten a lot of compliments on them over the years.”

Reems started his business in his parents’ home Nov. 14, 1959. He’s been in his current building off Belair Road on Hazelwood Avenue for nearly 45 years. Since then, the business has grown into one that features metal, electric and sand-blasted signs. Gardenville also makes signs that feature Braille.

Asked why he’s done pro bono work like St. Ignatius over the years, Reems said, “Because it’s my church. It was time to do something for them. I’ve helped other churches. A lot of them are hurting and if I can help them, I’ll help them.”

In an era when some bemoan the decline of craftsmanship, Reems said he aims for a product that is lasting.

“If you do good work, they’re going to find you,” Reems said. “After 50 years, you build up a nice clientele of people. One customer sees a sign that we’ve done or they’ve talked to somebody else and word gets around.”

Reems worked for $1 an hour for a year after graduation. He left when he couldn’t get a 10-cent raise and started his sign-making business, which he said was an excellent way to use his artistic ability.

He said there have been struggles over the years and some even bring tears to his eyes. Still, he’s always maintained a philosophy in life: “If you have perseverance, you can get over the humps, but you’ve got to keep driving.”

Two months after he started the business, he entered the U.S. Coast Guard for six months of active duty. He had been dating his wife, Donna, who to this day brings out the unabashed romantic in Reems.

He made a banner celebrating his 50th year of business, which included the words: “I also want to thank my wife for her endless love and support.”

Conley and his wife, Donna, have three daughters – Linda, Karen and Dawn – and five grandchildren. Family is everything to the couple. Pictures of their children and grandchildren adorn a wall at Gardenville Signs.

“It’s all connected – the family, the business … and we’re very blessed,” Donna said.

Not until recently has Reems even begun discussing having his own Web site, and the topic reveals his modesty.

“I’ve never had a goal of how big I wanted to get,” Reems said. “All I wanted to do was good work. I love what I do. It’s been a very good business for me.”