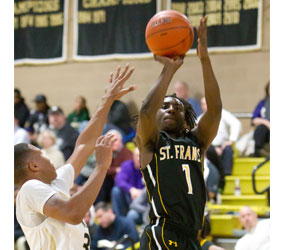 Chess is referred to as a “thinking man’s game,” and St. Frances Academy senior R.J. Williams has used it to hone his basketball expertise.

A member of the school’s Chess Club and a four-year starting point guard on the Panthers’ varsity, Williams credits chess with helping his decision-making as the basketball team’s floor general.

“Playing chess has helped me become a better thinker,” Williams said. “It helps me see the floor better and think while I’m playing instead of just playing wild.”

He credits chess for helping develop the patience and discipline he displays on the basketball court. Williams’ competitive nature has also been a boon there.

“I love to compete,” Williams said. “When I was younger, my father and brother always told me it was good to have competition. It’s always good to compete and to have fun while playing the game.”

All of those attributes are sure to benefit him, once he takes his talents to Loyola University next fall. He’ll join a program in which one of the top young talents is a former Baltimore Catholic rival, as Greyhounds’ freshman Dylon Cormier is a graduate of Cardinal Gibbons.

St. Frances Athletic Director Nicholas Miles has seen Williams mature over the years and is proud of how the young man has grown before his eyes.

“He (Williams) had some adjustment issues when he first got here,” Miles said. “But over these last two years he’s really been picking it up, especially academically. Basketball comes naturally for him, but he had to work at it in the classroom. To see a student put as much effort in the classroom like that should be applauded.”

Along with the chess club, he is a member of the school’s Spanish Club and the Blues Club, which promotes understanding and interaction between black and Jewish students. Williams, who attends St. Francis Xavier Church at the school, also tutors other students in Algebra I, Algebra II and Geometry.

Miles hopes that everyone praises Williams’ achievements both on and off the court.

“He’s really grown and matured in his four years, it’s just tremendous,” Miles said. “Everyone sees what he does on the floor, but he does the same thing in the classroom. He’s an example of what we like to see at St. Frances – taking someone who’s never been to a private school or a Catholic environment and seeing them succeed.”