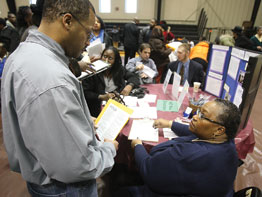 They started showing up outside St. Frances Academy at 6:15 a.m. on a frigid winter morning – and kept coming throughout the day, even as snow and ice turned the pavements and roads into virtual skating rinks.

Ralph E. Moore Jr., the center’s director, attributed the huge turnout – it ranged from 200 to 300 in previous years – to high unemployment and Barack Obama’s election as president.

“The numbers were so high, I think, because it’s the coming together of the dire circumstances people are in mixed with the sense of hope they feel.”

As Martin Luther King Jr. did before him, Mr. Moore said, President Obama has inspired hope for better days among African-Americans such as those who packed the school’s gym.

And the job fair is all about helping people reach dreams, however long deferred, and for whatever reasons.

The fair brought together job-seekers with a wide range of skills and experience and employers willing to hire those with little work experience or formal education as well as those who have criminal histories.

In keeping with Dr. King’s emphasis on service, the fair relied on numerous volunteers to help job-seekers write and polish resumes, brush up on interviewing skills and adopt attitudes and behaviors for success.

They’ll need all those skills in this tough job market, said Marjorie Rivers, 56, who came to the job fair from her home in Northeast Baltimore.

Ms. Rivers said she lost her job taking clients to appointments in a van in June 2008 and has been looking for work since, in part to support two young grandsons who live with her.

She said she also has more than 26 years’ experience as a lab worker at Johns Hopkins Hospital and has been receiving guidance from three different career centers.

She empathizes with other unemployed people, she said.

“I’m not alone, and we’re trying,” Ms. Rivers said. “We’re out here every day going to different job fairs, going to different career centers. It’s not easy, you know, constantly trying, and I’m trying to provide for my two grandchildren.”

Eboni Cherry, who last worked in 2007, in a housekeeping job, went to a resume workshop and a mock interview, recorded so interviewees could watch themselves later.

Ms. Cherry, 27, of East Baltimore, said she has two boys and was looking for housekeeping, warehouse or cashier jobs.

The time of the event was not lost on her.

“They couldn’t have picked a better day,” she said. “It was a great thing about Martin Luther King that he always wanted to help people get jobs, like he did during the march on Washington.”

Employers that set up shop at round tables filling half the gym included Giant Food; Humanim, a Columbia non-profit that helps people with disabilities; insurer AFLAC; and Canteen Foods.

The event also featured organizations that provide job training and networking, addiction treatment and other tools to help people prepare for the workforce.