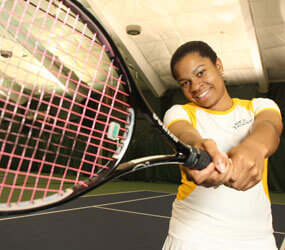 When Sade Thomas entered St. Frances Academy, she expected to take the court for the Baltimore school and become a star.

She did, just not on the one she expected.

Thomas will become the first in her family to attend college this fall, thanks to a tennis scholarship to Shaw University in Raleigh, NC. There, she plans to major in biology.

“When I thought about the fact that I was the first out of St. Frances to get a tennis scholarship that was major,” Thomas said.

Thomas graduated June 6 with her class at St. Matthew church in Northwood.

St. Frances’ athletic program is synonymous with basketball. Thomas once thought she would join Panther lore as an all-time great hoopster as she had shined on the court growing up.
‘I can say that converting from basketball to tennis has brought me to a lot of places I never would have gone to,” said Thomas, who has a 3.0 grade point average.

She attended Father Charles Hall and St. Mary of the Assumption schools before attending St. Frances.

“It’s actually been a blessing,” said Thomas, a non-Catholic. “My standards were extremely high, so it’s been a good thing to be in… Catholic schools my whole life.”

Thomas’ mother, Peronica Fleming, signed Sade up for summer tennis lessons before she attended St. Frances. Thomas did not fall in love with the sport, but gave it another shot in high school and discovered that she was a natural.

“I was actually good because when you play basketball, you pick up footwork,” Thomas said. “Converting to tennis, it wasn’t as hard for me to pick up on things because I had the hand-eye coordination too.”

Thomas started as a doubles player before growing into the team’s top singles player this school year. She was named an Interscholastic Athletic Association of Maryland B Conference All-Star.

In the past, she’s been involved in the school’s Service and Leadership by Teens (S.A.L.T) group.

She has received significant personal coaching Lenny Scheuermann at the Merritt Athletic Club in the Bare Hills neighborhood of Baltimore. Thomas said Owens’ post-school day coaching and guidance has been transformational.

“Coach O is like a father figure to me,” Thomas said. “He opened my eyes to a different sport, by showing that African-Americans can succeed in something else. We don’t have to be narrow-minded to just football, baseball and basketball. He’s taught me a lot of life lessons.”

Thomas, who is black, knows that success stories amongst African-Americans in her sport have been limited to the likes Arthur Ashe and Venus and Serena Williams. Thomas wants to potentially play professional and also serve as a tennis ambassador for young people.

Thomas said her scholarship would not have been possible without her mother, grandmother, Juanita Harper and aunt, Niani Wiggins.

“My biggest dream was just for Sade to make it successful in life and continue her career and dreams and she’s getting there,” she said. “We’re on our way.”