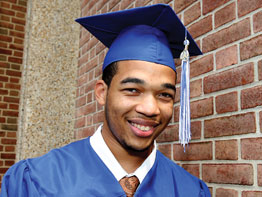 While others may have been busy playing video games or watching television, 17-year-old Glenn Bullock helped develop voice-control computer software for cars.

The graduating senior from St. Frances Academy in Baltimore did it as a participant in the Northrop Grumman mentoring program, working with some of the region’s top engineers. The software is already being produced, but it hasn’t yet been tested in cars.

The soft-spoken teen, who lives in the tough, inner-city Brentwood Village neighborhood that surrounds his school, said his success would never have been possible without support from St. Frances Academy. The school kept him on the right path and changed him in some very deep ways, he said.

“This school does mean a lot,” said Glenn, seated in St. Frances Academy’s foyer as black-and-white images of Oblate Sisters of Providence stared stoically from photographs on the walls.

“The people here really care,” he said. “I plan to come back and help out.”

Glenn arrived at St. Frances Academy as a shy, admittedly overweight freshman. Teachers at the historic first Catholic school for black youths encouraged him to get active in sports, and one Oblate Sister of Providence kept calling on him to answer questions in his English class even when he avoided raising his hand.

“I was the silent one in the back,” he said with a laugh.

The youth took his teachers’ advice and started playing golf. He joined the track and field team, throwing shot put and discus.

“When I came here, I was 265 pounds and on the edge of becoming diabetic,” explained the now-svelte, 235-pound athlete. “The coaches helped me so much.”

St. Frances Academy has also helped him mature spiritually. While he has always believed in God, the religion program at his school gave him a deeper understanding of the specific tenets of Christianity, he said.

Considered one of the “shining stars” of the Class of 2008, Glenn is a recent inductee to the National Honor Society and was selected as one of the seniors of his school to receive the prestigious archdiocesan distinctive scholars medal.

He has also been very active in the National Society of Black Engineers and was a member of the Student Government Association. He was the vice president of his class during his sophomore year.

This summer, Glenn will participate in a program in Colorado, sponsored by the John J. Hill Memorial Fund, which teaches young people how to be independent. He will then study computer engineering at Morgan State University in Baltimore.