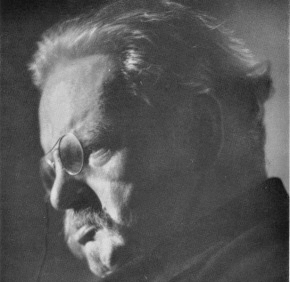 By Maria Wiering
mwiering@CatholicReview.org
When I was a junior in college, friends and I would throw parties that went late into the night. We’d pack people into a small apartment, and pass a hat to cover the cost of beer.
That’s probably where the similarity to a typical college party ends.
Guests were required to dress up; guys were often in tie, and girls in dresses. The growlers of porter came from a local brewpub. The discussions were threaded with theology, history and reference to saints, and it was the resulting debates of metaphysical significance that kept friends there long after the bars had closed.
Like me, most of the attendees were students in the Catholic Studies program at the University of St. Thomas in St. Paul, Minn., where classes focused on the Catholic intellectual tradition. A favorite of the modern Catholic thinkers was G.K. Chesterton (1874-1936), an English author and convert who once said, “In Catholicism, the pint, the pipe and the cross can all fit together.”
We called our gatherings “Chesterton parties,” and we think he – who has been called “the prince of paradox” – would have approved of our wholesome revelry. The man loved a good cigar, wine and steak – and once compared the Catholic Church to such.
He was 6-feet-4-inches and nearly 300 pounds. He famously told his literary sparring partner George Bernard Shaw, who was considerably thinner, “To look at you, anyone would think a famine had struck England.” Shaw’s reply: “To look at you, anyone would think you have caused it.”
Chesterton has attracted quite a following – and not just from idealistic undergrads – since he first put pen to paper in the late 19th century. He wrote nearly 100 books and thousands of essays on matters ranging from art to economics. He’s hard to pin down – he was a literary critic, poet, historian and philosopher, who also wrote some terrific novels and short children’s stories. Etienne Gilson, a preeminent historian, called Chesterton’s biography of St. Thomas Aquinas “without possible comparison the best book ever written on Thomas.”
He added: “Chesterton was one of the deepest thinkers who ever existed; he was deep because he was right.”
What’s all the fuss? The American Chesterton Society answers:
“All the issues we struggle with in the 21st century, Chesterton foresaw, and wrote about, in the early 20th century. Social injustice, the culture of death, statism, assaults on religion, and attacks on the family and on the dignity of the human person: Chesterton saw where these trends, already active in his time, would lead us. He was a witty, intelligent, and insightful defender of the poor, the downtrodden, the weak, and especially of the family.”
In April, I joined a gathering of the Chesterton Society’s Baltimore chapter, which was reading “Orthodoxy,” one of his greatest nonfiction works. Eight men and women huddled around a heavy table in the Pratt Central Library’s Poe Room to share insights and revel in his wit – the stuff that makes his writing such a delight. As one member told me, “His metaphors make him accessible.”
Chesterton’s audience encounters a thoroughly Catholic worldview. Said one fan, tapping his e-reader: “I stake my claim in what I believe is right and wrong in writing like this.”
Some Catholics attribute their conversion to the man, which may tie into another descriptor of the novelist/critic/poet: pending saint.
As his 140th birthday is observed May 29, a cause for his canonization is underway, an announcement no doubt celebrated by a few clanking pint glasses. In August, the Bishop of Northampton opened an investigation into Chesterton’s life, a first step on the unpredictable path toward sainthood.
If things progress, he’ll also need a couple of confirmed miracles to his name.
Said one local fan, who once spent little time with books, but now can’t enough of Chesterton: “Making me read might be one of them.”
To read more Amen columns, click here.
Maria Wiering is a staff writer for the Catholic Review.
PrevNext