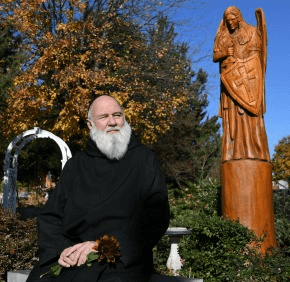 By Karen Sampson Hoffman
Special to the Review
The maple tree in the grotto of St. Benedict Church on Wilkens Avenue in Southwest Baltimore was planted in the 1930s. Benedictine Father Paschal Morlino saw something more than firewood when it was time to cut the tree down.
“I said when I cut the tree down that I wanted to save the trunk,” said Father Morlino, the longtime pastor. “I wanted something beautiful. I didn’t want to waste the tree. It would be a crime to waste it.”
A carving of St. Michael the Archangel from the trunk of the old tree was blessed Nov. 20 as a reminder of God’s protection. It was Father Morlino’s gift to the parish, in honor of his 50th anniversary as a priest.
Father Morlino chose a likeness of St. Michael because he is the patron saint of police officers, and he said, St. Benedict’s sits in a neighborhood where police officers are often called for assistance.
“There’s so much evil in the world, disruption and chaos,” Father Morlino said. “I think we all need all the protection we can get in this city.”
The old tree was the last in a line of maples that once shaded the street. Parishioners nursed the tree in its final years, but when it dropped limbs, it was time for it to come down.
Father Morlino found the artists he needed at Mississippi-based Artistry in Wood: Dayton Scoggins and Kenny Scoggins, a father and son team. The carving was completed May 14, just before his anniversary jubilee celebration.
“They had no picture, nothing,” he said. “They just went to town. They had big saws, little saws, finishing saws. And they were done and packed up and on their way in just two days. … A lot of people in the neighborhood love it. They’ve all thanked me for it.”
Baltimore City Police representatives meet with local community association members at the church once a month. It’s an opportunity for police and community members to better know each other and to address the “crime and grime” that affect the neighborhood.
“It really helps the relationship,” Father Morlino said. “It keeps things calmer and helps to manage the trouble spots better. We have a crowd here on those nights.”
Baltimore City Police Major Mark Howe said he was happy when he learned of Father Morlino’s plan for the old tree. A lifelong parishioner of St. Benedict, Howe has been a police officer for 37 years. He is currently commanding officer for the Communication Section.
“It’s very special to us that we know we have someone watching over us,” said Howe, who has seen St. Michael medals on the uniforms of police officers seeking his intercession. “He’s really a great friend to us. I know St. Michael was with us in the unrest last year. And not just in Baltimore, but other cities that have had unrest. He’s been a great friend to all of us.”
“It’s good that it’s right there,” said Bishop Denis J. Madden, auxiliary bishop of the Archdiocese of Baltimore, who presided during the prayer service and blessing of the carving. “His protection is so much needed in our city these days.”
The carving, he said, is a reminder of the many saints who pray for and protect the members of the community.
“When they’re in situations of poverty or danger, often people feel very much alone and that other people are not concerned about them and their welfare,” Bishop Madden said. “I think having a carving of St. Michael there reminds people that God does protect them. It gives them a feeling of confidence. We could all use such reminders.”
See also:
West Baltimore pastor celebrates 50 years as a Benedictine priest
PrevNext