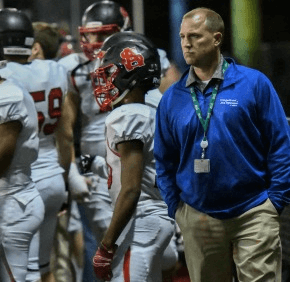 By Mary K. Tilghman
Special to the Review
When Archbishop Spalding High School and St. Frances Academy met in football Oct. 28, both were undefeated in the Maryland Interscholastic Athletic Association A Conference – and both had the same orthopedic specialist pacing the sidelines in case a player was injured.
Dr. John-Paul Rue has been the Spalding team physician since September. After the football season started, he began taking care of several players from St. Frances as unofficial team doctor.
Those young student-athletes were in good hands.
Rue graduated from the U.S. Naval Academy in 1993, then served in Japan and Iraq. He has been head team physician at the Naval Academy on the medical staff at the U.S. Capitol and the White House, where his details included Pope Francis’ visit in in 2015.
While he has attended every Spalding Cavaliers’ home game, St. Frances Academy’s 32-29 victory Oct. 28 was his first opportunity to watch the Panthers . With two teams on the field to monitor, the doctor had a lot to watch.
“I expect bumps and bruises,” he said. “I’m there for consultation if something happens.”
Rue said he sees student-athletes s a couple of hours a week, while the team trainer sees them every day. He respects the bonds that develop.

“Relationships are built on trust, experience and time spent together,” Rue said. “It’s a huge responsibility.”
He met Casey Berry, Spalding’s athletic trainer, during her yearlong internship as a rehabilitation coordinator at the Naval Academy.
“She’s awesome,” Rue said. “She spends hours and hours every day with these kids.”
“He makes the time to see athletes almost immediately,” said Berry, of the value of having her players also under Rue’s eye.  ““It keeps the well-oiled machine going. Everybody wants to be bigger, faster, stronger these days. Injury rates go up.”
Henry Russell, the first-year head coach of St. Frances Academy,  concurred.

“It’s football. You’re going to have injuries,” he said. ““Rue has been a blessing for us, helping get kids health and diagnosing injuries.”

St. Frances Academy defeated Archbishop Spalding 32-29 Oct. 28. (Kevin J. Parks/CR Staff)
Rue, who was recommended to St. Frances Academy by Dr. Mark Applefeld, a Mercy Medical Center colleague, offered to help once he saw that the school had limited resources. (In just its ninth year of football, St. Frances Academy went unbeaten in the MIAA A Conference.)
“There was a time I didn’t know where to turn to,” said Russell who worships At St. John Neumann in Annapolis and Holy Rosary in Baltimore. “He’s just been amazing.”
Rue was a Minnesota teen and inspired by the movie “Top Gun” when he applied for an appointment to the Naval Academy. After his interest turned from aviation to medicine, he trained to be a Navy doctor, finishing his education at the Johns Hopkins School of Medicine. After his residency there, he served four years in Japan and then was deployed to Iraq as a chief orthopedic surgeon.
After returning to the States, he served as team doctor at the Naval Academy where one in three play an NCAA Division I sport.
“They get a lot of injuries,” he said.
Rue, who lives in the Annapolis area with Elizabeth, his wife of 22 years, and their four children, retired from the Navy in August. He began his work with Mercy Sept. 1, and has an office at its Glen Burnie location.
Rue said he respects the efforts of today’s student athlete.
“Athletes are stronger. Athletes are faster,” Rue said. “It’s been their life’s ambition to do what they do.”