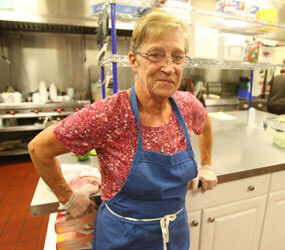 The pastor of St. Augustine knew Carmichael as a waitress and cook from a local Italian restaurant that was closing. Carmichael had worked there for 20 years.

At that time, the school was using a restaurant twice a week and couldn’t afford another a staffer.

“I think Father Bowen recognized a hard-working, but good person,” Schratz said. “He was concerned she was not going to be employed and said, ‘We need to hire Ms. Ruth.’”

He tabbed Carmichael for parish functions, and, before long, Carmichael had convinced Schratz that she could make a difference financially and culinary-wise at the school. After a year or two, she became the school’s kitchen manager.

Many of the parishioners and school families were already familiar faces since they frequented the restaurant where Carmichael worked.

Carmichael, 68, shops for the food and has an assistant in the kitchen. Carmichael, known as “Ms. Ruth” to everyone at the school and the parish, provides meals for First Holy Communion, retreats, funerals, religious education meetings, end of the year celebrations and faculty Christmas dinners among other activities.

School families are made aware of the menu a month in advance. Her homemade chicken tenders and ravioli meals are popular amongst students and staff. She relishes seeing smiles.

“It’s exciting to know they appreciate it,” said the humble Carmichael.

Carmichael created a monthly fundraiser called “Ms. Ruth’s Family Dinner,” that brings school families, parishioners and the Elkridge community together. She hopes to raises tens of thousands of dollars for the school.

“I’m all about making money for the school,” she said.

Carmichael prepares breakfast for “before care” students and lunches four days a week. She’s the first person in the school each day, arriving at 4 a.m.

She converted to Catholicism a year ago following the death of her son, who had a heart attack at the age of 40 two years ago.

“There’s a lot of people here can change you, big time” Carmichael said.

Carmichael was a Christian who occasionally attended Catholic Mass before her conversion. After her son’s death, she felt neglected by her parish and St. Augustine’s community rallied around her.

“These people were amazing,” Carmichael said. “Father Bowen was on vacation and he came back to do the funeral for me. I just felt like this is where I really belong. They just pull you in. You feel like you have a whole new family here.”

Schratz said the school and parish had to respond with kindness and love.

“She was so good to us,” said Schratz, wiping away tears. “I’ve never met anyone that was as selfless and who gave expecting nothing in return. I wish I had a whole bunch more Ms. Ruths. She’s just a saint.”