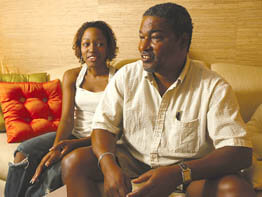 One of the qualities that Pikesville resident Nia Wheeler has always admired about her father was his endless supply of energy.

So, when his diabetes threatened to sap that oomph, the St. Ann, Baltimore, parishioner decided to furnish him with a healthy kidney.

Undergoing surgery was an acceptable price to pay to see her dad – Tony Wheeler – back on his bike and partaking in a host of other physical activities the 48-year-old pollution control analyst has taken pleasure in for decades.

The 2004 graduate of the Institute of Notre Dame, Baltimore, who will return for her senior year as a nursing student at Howard University in Washington at the end of August, understood the limitations her father would experience when doctors told him in 2006 his diabetes had progressed to the point where he had to begin dialysis treatments.
The four-hour procedures would have to be done three times a week, limiting his time to participate in the high-energy sports and activities he enjoys so much, and his worsening prognosis threatened to drain his boundless vigor and dampen him emotionally.

“I was like, ‘why don’t I just give him one of my kidneys,’” Ms. Wheeler recalled, without concern for her own health or fear of the sacrifice. “I didn’t need both of them and he needed one to keep him off of dialysis. I know he’d do it for me.”

Though an option for Mr. Wheeler was to be placed on a universal transplant list for a cadaver kidney, a living related transplant donor promised to significantly reduce the waiting, said Marc Allegro, patient care manager for Good Samaritan Hospital’s renal department.

“It could take many years to find a successful match when waiting for a cadaveric kidney,” said Mr. Allegro, who is also a registered nurse at the Baltimore hospital. “Related to this, the needed transplant surgery involving a living related kidney donor can be completed at an earlier time when the recipient is most likely in a better state of health. This one factor can make a significant difference in the likelihood of a successful result.”

The list of potential donors included Mr. Wheeler’s parents, brother, sister and wife, but all were ruled out for reasons ranging from the wrong tissue type to health risks involved in giving up a kidney.

Because diabetes runs on her father’s side of the family, Ms. Wheeler had to be tested to see if she was at risk of developing the disease later in life and how her body would function with one kidney.

After the screening process determined she was the ideal candidate, father and daughter arranged for transplant surgery – which was postponed once in the fall of 2006 because Mr. Wheeler had developed a blood clot that had to be treated – and the procedure was completed May 16.

Out of the hospital in two days following the laparoscopic procedure that left minimal scarring, Ms. Wheeler said the noticeable difference in her father’s health was worth any inconvenience endured on her part.

Monitored closely since being released from the University of Maryland Medical Center May 21, Mr. wheeler has already resumed bicycling and swimming and hopes to return to his job at the city of Baltimore’s department of public works’ environmental services sometime in August.

“He can’t sit still,” Ms. Wheeler said of her recovering father. “He’s got to be doing something all of the time. He’s always been that way, as along as I can remember.”
Though the kidney transplant was deemed a success, it doesn’t cure the diabetes Mr. Wheeler was first diagnosed with when he was 19.

“This is something I’m going to have to live with, but my daughter’s kidney makes it more manageable,” said Mr. Wheeler, who remains on a restricted diet that includes little to no alcohol. “I’m so incredibly grateful to her.”

“I think it really is very inspiring,” said Sister Jeanne Barasha, S.S.N.D., pastoral administrator of St. Ann. “It has shown us as a parish the deep sacrifices people are willing to make for one another.”

Ms. Wheeler blushes in response to the praises she has received, but doesn’t regard her gift as a sacrifice.

“My father gave me life and has made so many sacrifices to make sure I’ve had the opportunities for a good future,” she said. “This (donation) wasn’t a sacrifice. It was an honor.”