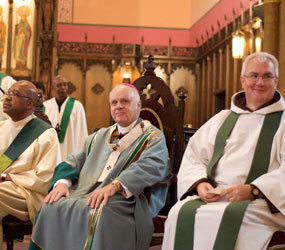 As Archbishop Edwin F. O’Brien sat next to Capuchin Franciscan Father Paul Zaborowski, parishioners of St. Ambrose Catholic Church made it their collective duty to share their upbeat style of worship with their honored guest.

Although he had visited the church and its school before, Archbishop O’Brien celebrated Mass with the flock at St. Ambrose for the first time Sept. 26.The archbishop was thoroughly impressed with his experience at the northwest Baltimore parish.

“I try to get to a different parish every Sunday,” he said. “I’ve heard so much about St. Ambrose. They’re a lively Catholic community, and they proved that today.”

Father Zaborowski, pastor of St. Ambrose, was glad Archbishop O’Brien accepted his invitation and was able to fit into his schedule what he sees every week.

“Having him (Archbishop O’Brien) here was a good experience,” Father Zaborowski said. “It was a wonderful opportunity for the parish. He is our shepherd – it’s good for the people to be able to make the connection with him.”

Many of the ministries at St. Ambrose made a connection with the archbishop throughout the Mass by sharing their talents. Incense smoke filled the air as drummers and liturgical dancers set the tone for the celebration from the very beginning.

“Everything was beautifully done,” Father Zaborowski said. “Everyone coming together using their gifts creates good liturgy and good worship.”

“I was filled with the spirit today,” Jiggetts said. “The spirit moved and the spirit led the service, and I was overcome with emotion.”

Archbishop O’Brien made it known that he would also like the spirit to lead the parishioners of St. Ambrose to give to those in need.

During his homily, he recounted the parable of Lazarus, the beggar who laid outside the gate of a rich man who neglected to help. Stating that man was made in God’s image, Archbishop O’Brien explained that because God gives all of the time, everyone has it within themselves to do the same.

The message he delivered along with his presence were both well received by the parish, which was evident throughout the entire celebration.

“We were charged up, we were on fire this morning,” said Norma Townsend, director of the youth ministry. “The spirit of God was in our midst this morning. The archbishop himself even said we praised the Lord today. We wanted to give him the true feeling of how we worshipped and praised God.”

Archbishop O’Brien said he would like others to experience that feeling as well.

“The parishioners here put both their hearts and soul in the Mass,” he said. “The liturgy should involve everyone, and full participation is something you wish you could see at every Mass. We should be proud of a parish like this. I wish the entire diocese could see it and participate in it as I did today.”