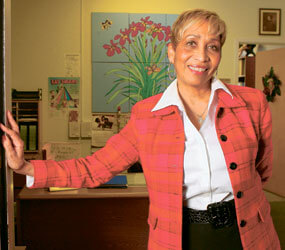 WOODLAWN – Dressed for the occasion, a long line of honored guests walked toward the stage, enveloped in applause by friends, relatives and religious.

Black Catholics from across Baltimore descended upon Martin’s West Feb. 11 for the 15th annual Mother Mary Lange Awards Banquet. The awards recognize individuals in three categories – for leadership, service and youth participation – at parishes within the archdiocese.

Sanders has been the principal of St. Ambrose Catholic School for the past 11 years and served on the Blue Ribbon Committee that provided input on the future of Catholic schools in the archdiocese. She felt that her contribution as a Catholic educator played a role in her selection.

“I try to work at bringing the school and church together – it helps with the evangelization of the kids,” said Sanders, who added that she was surprised by her selection for the award. “I try to serve as an example for my students. I’m not only an instructor, but I’m also a faith leader. It’s my wish that the light of God shines through me.”

As staff members of the Office of African American Catholic Ministries a number of years ago, Therese Wilson Favors and Howard Roberts visited parishes. They witnessed the efforts of leadership and service by those young and old, and felt it essential that those efforts be recognized and celebrated during Black History Month.

The first awards banquet was held in February 1997.

There was unanimous agreement to name the award after Mother Mary Elizabeth Lange, co-founder of the Oblate Sisters of Providence.

A native of Haiti, Mother Lange fled the country in the late 18th century during a revolution. By 1818 she was educating African-American children in her own home in Baltimore, as there was no public education for black children here at that time.

About a decade later, Mother Lange, along with the help of Sulpician Father James Joubert and two other black women, started the first Black Catholic school in America, St. Frances Academy.

The 129th anniversary of Mother Lange’s death was commemorated Feb. 6 at the Oblate Sisters of Providence Motherhouse. A Mass, celebrated by Bishop Denis J. Madden, reflected on Mother Lange’s cultural diversity, with the first and second readings being read in Spanish and French, respectively.

The occasion was also used to pray for the canonization of Mother Lange.

Though it has been more than a century since she died, it is evident that Mother Lange’s spirit lives on in parishes throughout Baltimore. According to Sanders, it is even more special when that same spirit is recognized in recipients by those who worship alongside them.

“When your pastor (Capuchin Fransiscan Father Paul Zaborowski) sees your hard work as a leader, it’s especially gratifying,” Sanders said. “I’ve received awards through the years, but this is special because it comes from your own people.”