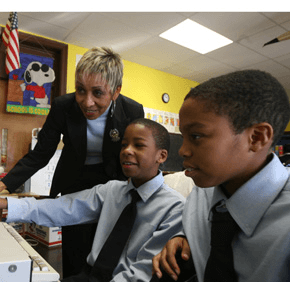 By Elizabeth Skalski
eskalski@catholicreview.org
Pamela Sanders, principal of St. Ambrose Catholic School in Park Heights, choked back tears the day after it was announced that her school would be closing at the end of the school year and merging with one across town.
“It’s like a death and we are mourning the loss of our school,” Sanders, who has been the school’s principal for 12 years, said March 14. “Our children are having a difficult time with it. We all are.”
St. Ambrose is closing at the end of the school year and will merge with Holy Angels Catholic School, the Archdiocese of Baltimore announced March 14.
Students at the Park Heights school will be bused to Holy Angels, which is located about six miles away on the campus of Seton Keough High School.
The school closure is the result of declining enrollment and mounting debt, school and archdiocesan leaders said.
Capuchin Franciscan Father Paul Zaborowski, pastor of St. Ambrose, called March 14 – the first day students were at school since the news broke – “pretty somber.”
“There’s an overall feeling of sadness but I think most people understood,” Father Zaborowski said. “It became more and more difficult to maintain the quality of education we would want to.”
The school, which opened in 1926, has seen declining enrollment over the years.
St. Ambrose’s currently has 118 students, which is 20 to 30 fewer students than last year, Father Zaborowski said in a letter to the school community. In 2002 the school had about 220 students. Park Heights has seen a 32 percent decline in households with school-aged children, ages 5 to 17, from 2000 to 2010 and 41 percent since 1990, according to U.S. Census data.
“For the school to be financially sound we need an enrollment of 150 children or more,” Father Zaborowski said in the letter.
Only 65 students were registered for the 2012-2013 school year, an archdiocesan statement said March 14.
“Due to the low enrollment, St. Ambrose has been unable to meet financial obligations, including payroll and health benefits for employees, without assistance from the Archdiocese,” the statement said.
Sanders said March 14 was “a very, very sad occasion” for the school community.
Sanders said once the community moves past “the mourning period,” they plan to celebrate the school and end the year “on a very positive note.”
St. Ambrose’s 85th graduation ceremony will be held at the end of the school year.
“We encourage the families to continue Catholic education for their kids and we hope that will be possible for most of them,” Sanders said.
Nineteen schools in the Archdiocese of Baltimore have closed since June 2009. St. Ambrose was named a receiving school when 13 schools were closed in 2010. Months later, the school was chosen to pilot a New American Academy Model, which included team teaching and teachers rising in grades with their students.
Dr. Barbara McGraw Edmondson, superintendent of Catholic Schools, said the Archdiocese was “committed” to keeping St. Ambrose open, but despite their “best efforts” there “wasn’t a strong future for that school.”
Edmondson said it wasn’t until the end of February that “we knew we were really going to move forward in this direction.”
Despite the sadness, Edmondson said “there is great hope as well for that community.”
Read here for more on the St. Ambrose story.
PrevNext