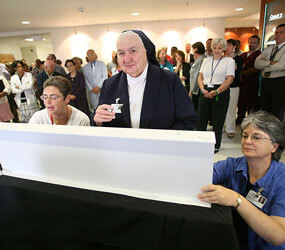 As construction workers recently completed the steel skeleton for a 120-bed patient tower at St. Agnes Hospital in Baltimore, they helped secure the future of a Southwest Baltimore institution. But the project is also have a big impact on the present.

William Greskovich, vice president of operations and campus construction for St. Agnes Hospital, said the construction project is keeping many local workers employed at a time when they might otherwise be out of work.

In addition to the patient tower, the $200 million building effort also includes the renovation and expansion of the St. Agnes Cancer Center, renovation of existing patient rooms, a new medical office building and a parking garage. The entire revitalization project is expected to be complete in 2012.

“It’s having a tremendous impact,” Greskovich said. “One of the things Bonnie Phipps (St. Agnes president and CEO) focused on was for us to try to keep as much of the construction local as possible – through our contractors and, to some extent our suppliers. We’ve been able to do that.”

Greskovich said he has spoken with subcontractors who have told him they would have faced possible layoffs had St. Agnes put construction on hold when the economy took a bad turn in the last year. Suspending the project wasn’t considered, Greskovich said, because there are hidden expenses that can emerge if construction is put off. More importantly, he added, it would not be in the interest of the community.

“We’re telling the community we’re going to be here for a long time, continuing to provide them quality health care,” Greskovich said. “We’ve been here for 148 years and we haven’t had an investment of this stature in about 55 years.”

The hospital will likely take occupancy of the new patient tower in early 2011.

“We will have private patient rooms in the new tower,” Greskovich said. “They were designed by doctors, nurses and staff so we can make the care most efficient in terms of being closest to the patient and putting all the materials as close as possible to the patient.”

Greskovich noted that upon the new tower’s completion, the existing tower will be renovated to provide single-patient rooms instead of the current double rooms.