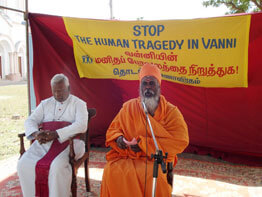 Bishop Savundaranayagam also appealed separately to the country’s president and Tamil rebels for the safety of people trapped in the combat zone, reported the Asian church news agency UCA News.

A statement the diocese’s justice and peace commission released Jan. 29 said more than 400 civilians had been killed and more than 1,400 injured there since mid-January.

A protest fast outside the diocese’s cathedral Jan. 28 drew Anglican bishops, Catholic and Church of South India priests, nuns and others, including members of Hindu organizations. They meditated, prayed and appealed for the international community to intervene.

“It is the time to express our solidarity. … People who may be Hindu or Christian in the war zone – they are our brothers,” Subramaniam Paramanathan, a Hindu, told UCA News in a telephone interview from Jaffna Jan. 29.

Bishop Savundaranayagam, also speaking from Jaffna, said he had written to Sri Lankan President Mahinda Rajapaksa and to Tamil rebel leader Vellupillai Prabhakaran to ensure the safety of nearly half a million people.

In his letter, dated Jan. 25, the bishop appealed for the “extension of a civilian safety zone” in the Mullaitivu district to include several additional villages.

State forces earlier declared a safety zone of about 14 square miles in the rebel-held territory. More than 6,000 civilians reportedly have arrived in that zone, UCA News reported.

According to Bishop Savundaranayagam, displaced people keep flocking into areas that already are overcrowded. Priests and nuns had joined them, assembling in churches in the northern part of Mullaitivu.

“They are moving with the people,” the bishop said of the church workers. “Having lived with them in all suffering, they will not abandon them.”

The bishop reported that U.N. agencies and the Red Cross are having great difficulty supplying essential aid to people.

The rebel Liberation Tigers of Tamil Eelam launched their armed struggle in 1983 to create an independent state for minority Tamils, claiming decades of systematic discrimination under successive governments led by the Sinhalese ethnic majority after independence from Britain in 1948. The conflict has claimed 80,000 lives.

Bishop Savundaranayagam refuted some recent Colombo-based media reports that quoted him as not opposing the war.

“The church is always against the war. But our priority here is the safety of every innocent civilian in the war areas,” he stressed.