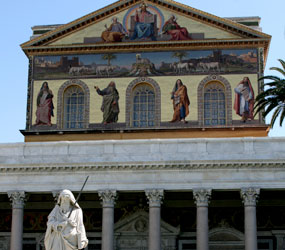 VATICAN CITY – As spring started showing its colors in Rome, many of the pilgrims coming out of the Basilica of St. Paul Outside the Walls were glowing – and not only because the sun was shining brightly.

Crossing the threshold of the “Pauline Doors,” praying at the tomb of St. Paul, confessing their sins, receiving the Eucharist and offering specific prayers, they came away with a plenary indulgence.

Sister Palmagnese Rossini, a member of the Sisters of Mary Reparatrix, made her pilgrimage March 10.

Asked why she wanted an indulgence, she said: “We are all children of Adam and Eve and despite the sacraments and the sacrifice of Jesus, we have a residue of sin. We want to be splendidly pure like the Blessed Mother,” and an indulgence gives repentant Christians that extra shine.

The Catechism of the Catholic Church defines an indulgence as “the remission before God of the temporal punishment due to sin whose guilt has already been forgiven.”

Especially for the Pauline year – marking the 2,000th anniversary of the apostle Paul’s birth – the Catholic Church is offering an indulgence to pilgrims who visit his tomb at the Basilica of St. Paul’s Outside the Walls.

Cardinal Andrea Cordero Lanza di Montezemolo, archpriest of the basilica, said that with the Pauline year, which began last June, “the number of pilgrims from around the world is increasing.”

“They come to visit the tomb of the apostle,” he said, and the indulgence is an extra grace available to those who have the right attitude of faith.

Apparently, though, offering indulgences specifically for a year honoring St. Paul struck some people as a bit odd.

It was St. Paul who wrote in his Letter to the Ephesians: “For by grace you have been saved through faith, and this is not from you; it is the gift of God; it is not from works, so no one may boast.”

In an article for the Vatican newspaper, L’Osservatore Romano, the pope’s chief ecumenist said the Pauline year reminds Christians – both Catholics and Protestants – of St. Paul’s central teaching that we receive justification and salvation from Jesus Christ through no merit of our own.

Writing in the March 7 edition of the newspaper, Cardinal Walter Kasper, president of the Pontifical Council for Promoting Christian Unity, said indulgences still make some Catholics and some of the church’s ecumenical partners nervous.

First of all, the abuse of selling indulgences was a key factor sparking the 16th-century Protestant Reformation and, second, the practice could be misunderstood as the church promoting good works to obtain salvation.

In Holy Year 2000, some observers – especially Protestants in Italy – objected to what they considered as the church offering too many indulgences and with too much encouragement.

Cardinal Kasper wrote in L’Osservatore Romano that his office held a symposium on indulgences with Protestant leaders in 2001 and cleared up most of the misunderstandings.

The Rev. Lothar Vogel, a Lutheran professor of church history at Rome’s Waldensian Theological Faculty, told Catholic News Service March 11, “For me, indulgences are not a trauma or an annoyance, but part of a spirituality that has nothing to do with me. It’s extraneous.”

“The practice of indulgences that led to such pain in the 16th century was reformed by the Catholic Church almost immediately,” he said. Even the current practice shows that Catholics and Protestants have a different view on the relationship of faith, personal responsibility and the role of the church as a channel of grace, he added.

Cardinal Kasper said Catholics, too, must understand that the church changed the way indulgences were handled in order to make their meaning and their relationship to salvation in Christ clear.

“When we speak of the church’s treasure of grace, we are not talking about any material reality or a kind of depository from which the church can make withdrawals when needed,” he wrote.

“The treasure of grace is, in the end, Jesus Christ” and his immeasurable mercy, which the church – the body of Christ – shares, he said.

Even after a person’s sins are forgiven, the cardinal said, it is obvious he or she “still lives in this world marked by the consequences and structures of sin.”

An indulgence helps attenuate those consequences and gives each Christian added strength to continue the daily battle against sin, he said.

“An indulgence recalls the need for salvation and (the fact) that this can occur only through Jesus Christ. It is a reminder of the penitential character and the spiritual struggle of Christian life,” Cardinal Kasper wrote.

While Catholics are under no obligation to seek an indulgence, he said, “it is a useful and beneficial pastoral gift for facing – with the grace of God and with the help of the intercession of the entire communion of saints – the struggle against the power and violence of evil.”