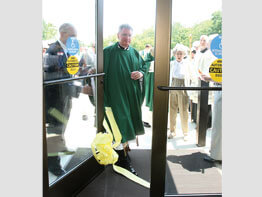 Three days before St. Ursula was scheduled to open its new spiritual center, Monsignor James P. Farmer was walking the halls, checking every square inch of the Parkville building.

Monsignor Farmer, the church’s pastor for the last two years, anxiously awaited the arrival of a finished painting of Our Lady of Guadalupe that would adorn the entry wall of the center, located below the church, and complete the $1.6 million construction that had taken place.

When the July 13 dedication for the center arrived, everything was in place, and a relieved Monsignor Farmer took his place alongside Archbishop Edwin F. O’Brien to concelebrate Mass.

As parishioners milled about the center following a ribbon-cutting and blessing by Archbishop O’Brien, they said, “I can’t believe how nice this looks.”

Even though the parishioners chose the name of the spacious center carefully, they will finally have a meeting place of their own as they have held meetings at a local, non-Catholic church in the past.

The center’s freshly painted hallways were lined with refinished woodwork of the Stations of the Cross, as well as other artful depictions of Jesus Christ and of the Last Supper. Much of the spectacular artwork in the hallway was done or dedicated by parishioners.

When Monsignor Farmer arrived as pastor at the Harford Road parish in 2006, the site of the center was a lower church at St. Ursula. The ceilings were crashing in and much of the chapel was beyond repair.

“When I got here, the archdiocese had to close it down,” Monsignor Farmer said. “The tiles were falling in. Mold and asbestos were everywhere. They closed it down because it was a health hazard.”

Parishioners helped raise money to meet the escalating costs through governmental requirements. Monsignor Farmer said his parish remained patient and supportive through it all.

“The two things that struck me about this were the generosity of people and the goodness of almighty God,” Monsignor Farmer said.

During his homily on the day of the dedication, Archbishop O’Brien spoke of how St. Ursula “had good, solid, rich soil” as a spiritual influence in the Archdiocese of Baltimore. He cited Bishop W. Francis Malooly, western vicar, who was raised in the parish and was named bishop of the Wilmington, Del., diocese July 7, as well as other parish-raised clergy.

As the parish transitioned to a new era with the opening of the spiritual center, Archbishop O’Brien asked, “Would anyone say the soil is not rich enough to produce more sisters and more priests and more deacons? Would anyone sell this parish short on vocations to religious life? That is what the atmosphere, the soil, of this parish has been doing for so long and will continue to do in the years ahead.”