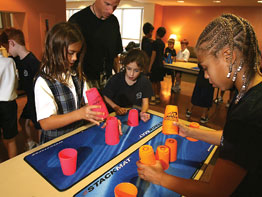 The fifth-grader placed his small hands on each side of the timer joined to the oblong blue rubber StackMat on the table. When he lifted them, the numerals rapidly ascended as Colin McCabe’s hands skillfully handled a dozen plastic blue cups. He up-stacked. He down-stacked. After 15.98 seconds he returned his hands to the StackMat to stop the clock.

True, Colin’s time didn’t break the world record for speed stacking (7.25 seconds), but after all, it was only practice. During the weekly Speed Stacking Club meetings at Resurrection-St. Paul School, Ellicott City, stacking and unstacking cups as fast as possible is goal for the 15-member team.

“Anyone can do it. Someone doesn’t have to be athletic,” said physical education teacher Kevin Sokoloff, who introduced speed stacking to students last year. The sport is “huge” in the Midwest, he added.

“The kids were skeptical at first,” he said, “they didn’t think it was a sport.”

Using a stack of three-holed light plastic cups in sets of lime green, hot pink, blue, and brown, stackers use patterns and sequences to stack “official cups” of the WSSA, the World Sport Stacking Association. A cycle has three phases: the 3-6-3 stack, the 6-6 stack, and the 1-10-1 stack.

But don’t squeeze the cups or they’ll stick. And try not to look at what you’re doing. “If you look, it slows you down,” said Mr. Sokoloff. “It’s all about feel.”

Usually, musically inclined kids are better at it than athletes, said the teacher, who has introduced speed stacking as a unit in the school’s P.E. classes. From his large black canvas bag stuffed with StackMats and 30 sets of cups, he pulled a weighted stack of silver cups used solely for practice, similar to the concept of an on-deck batter sliding a weighted “doughnut” on a baseball bat.

“It’s fun. You can do it over and over again,” said Colin, 10, as he sped through another round of “cups,” the shortened name for the sport. “It helps with my (basketball) dribbling.” Sometimes he and little brother Aidan McCabe, a second-grader in the club, practice at home.

Speed stacking can increase a child’s hand-eye coordination, ambidexterity, and fine motor skills, said Mr. Sokoloff. “It teaches them to use both hands at the same time by building cups into pyramids … it uses both sides of the brain, therefore enhancing skills in art and music as well as sports. They like it.”

Come spring, the Speed Stacking Club will see how they “stack up” against other teams. Most likely, the Resurrection-St. Paul team will compete in a tournament.

“I think it’s something you have to see in person,” said Mr. Sokoloff. He encourages those interested to visit www.speedstacks.com for a video of last year’s tournament.