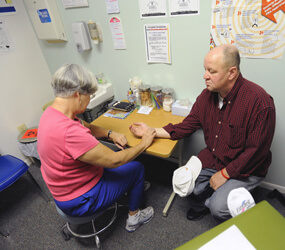 WASHINGTON – Will federal health reform be like “the Massachusetts plan on steroids,” as one commentator predicted, or something else entirely? Will it require individuals or employers to “play or pay”? Will it involve some new form of government-run health care or leave the current system more or less intact? And the biggest question of all – who will pay for reform?

As exact language for legislative proposals begins to dribble out from Congress, some of those questions are beginning to be answered.

Health reform was the hottest topic at the Catholic Health Association’s annual assembly June 7-9 in New Orleans. But in public talks and in private conversations, nearly everyone acknowledged that the devil is in the details of various House and Senate plans that are still being written and amended. And inevitably, the final product will be some conglomeration of those proposals.

As the Catholic health leaders were ending their meeting in New Orleans, Sen. Ted Kennedy of Massachusetts and his fellow Democrats on the Senate Committee on Health, Education, Labor and Pensions released a 316-page partial draft of the Affordable Health Choices Act, which would require individuals to purchase health insurance except in hardship cases.

The health plan currently in effect in Massachusetts requires employers to contribute to health insurance for their employees and individuals to purchase insurance if they are not covered by a plan through work, with some state subsidies.

At a workshop during the assembly, Michael F. Rodgers, CHA senior vice president for advocacy and public policy, said some of the other health-related proposals already before Congress include:

Although each of the bills deals with some aspect of health care reform that the member of Congress considers most important, none of them fully addresses the gamut of issues raised by the health reform debate.

Sen. Max Baucus, D-Mont., and the Senate Finance Committee he chairs were expected to release the language of their health reform proposal the week of June 15, with markup of the legislation the following week, Rodgers said.

He said the goal of having legislation reach a House-Senate conference committee by September and signed by President Barack Obama in October is “ambitious but doable.”

A key sticking point in the road to national health care reform has been the question of whether there should be a government-run health plan that would compete with private insurance companies.

Some say the so-called “public option” is necessary to ensure universal coverage and will cut down on health care costs. Others say it could put private insurers out of business and eventually lead to government-sponsored health care becoming the only option for all but the wealthiest Americans.

Sen. Kent Conrad, D-N.D., has proposed a compromise that would create nonprofit health care cooperatives with federal seed money. The cooperatives would be owned by groups of residents and small businesses and would negotiate directly with medical providers.

Although the White House has not proposed any specific legislative language, Obama is taking a hands-on approach to the debate, with a town hall meeting in Green Bay, Wis., June 11 and a scheduled address to the American Medical Association June 15.

The religious community is making its own contribution to the debate. An interfaith service of witness and prayer was set for June 24 in Washington, with similar events planned around the country as part of an interfaith week of prayer for health care reform.

More than 40 national faith organizations and religious denominations were expected to participate in the Washington service, including some Catholic groups.

At the convention workshop, Kathleen A. Curran, CHA senior director for public policy, offered her audience a few key points to make to members of Congress in the next few weeks.

“We must seize the opportunity for reform now – we can’t wait any longer,” she said. “Don’t let partisanship or ideology become roadblocks. … We must have a system that makes health care available and accessible to all.”

That’s a message Sister Bernice Coreil, a Daughter of Charity who is senior executive adviser to the president at Ascension Health in St. Louis, has been carrying forward for a long time.

Fifteen years ago, she stood on the White House South Lawn with President Bill Clinton in support of universal coverage in a national health reform plan.

“Our faith tradition teaches that people have a right to health care not because of their age, poverty, race, contributions or disease, but because of their intrinsic value as human beings,” said Sister Bernice, who then chaired CHA’s Leadership Task Force on National Health Policy Reform.

The Catholic message on health care reform remains the same, and “this time,” Sister Bernice said in New Orleans, “I think we’re going to do it.”