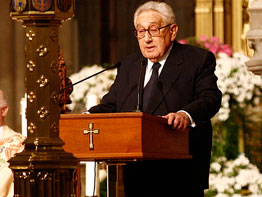 NEW YORK – Mourners remembered William F. Buckley Jr. at an April 4 memorial Mass as a man of deep faith and unfailing confidence in the Catholic Church who brought people to believe in God and inspired vocations to the priesthood.

“His tongue was the pen of a ready writer” and his “words were strong enough to help crack the walls of an evil empire,” according to Father George W. Rutler, principal celebrant and homilist at the memorial Mass at St. Patrick’s Cathedral in New York.

“His categories were not right and left but right and wrong,” Father Rutler said. “What graces he had to change a century came by his belief in Christ, who has changed all centuries.”

Mr. Buckley, the erudite spokesman for the conservative political movement in the United States, died at his desk in Stamford, Conn., Feb. 27 at the age of 82. He was the founder of the National Review magazine, hosted the weekly “Firing Line” television program for 33 years and wrote more than 50 books.

More than 2,000 people attended the memorial Mass, which was concelebrated by 18 priests. The mourners included both ticket-bearing celebrities and members of the general public who were longtime admirers of Mr. Buckley.

In his homily, Father Rutler said Mr. Buckley’s “life testified that there can be no concord with evil, for evil always seeks to devour the good, and peace at any price is very expensive.”

Dr. Kissinger said Mr. Buckley’s conservatism “was about deliberation of the human spirit.”

He described a conversation he had with Mr. Buckley about the relationship of knowledge to faith.

“I surmised it required a special act of divine grace to make the leap from the intellectual to the spiritual,” he said. “In a note, Bill demurred. No special epiphany was involved, he argued. There could be a spiritual and intellectual drift until, one day, the eyes opened and happiness followed ever after. Bill noted that he had seen that culmination in friends. He did not claim it for himself.”

Dr. Kissinger said that Mr. Buckley was “truly touched by the grace of God.”

“We will forever remember how we were sustained by Bill’s special serenity,” he said, adding, “The younger generation was inspired by the inward peace Bill radiated.”

Mr. Buckley’s only child, writer Christopher Buckley, thanked the concelebrants, the organists, the St. Patrick’s Cathedral choir and the director of music, Jennifer Pascual, saying the music at the Mass was something of a dress rehearsal for Pope Benedict XVI’s planned visit to the cathedral April 19.

“Doubtless, he would have preferred it the other way around,” the younger Mr. Buckley said.

He said that at his father’s wake he put several items in the casket to help him “cross the River Styx.” They were his father’s favorite rosary, the television remote control, a jar of peanut butter and his mother’s ashes. “No pharaoh went off to the afterlife better equipped than he.”

Mr. Buckley also recited the Robert Louis Stevenson poem “Requiem,” which he said he would recite at his father’s burial in Connecticut later that day: “Under the wide and starry sky, Dig the grave and let me lie, Glad did I live and gladly die, And I laid me down with a will. This be the verse you ‘grave for me: Here he lies where he long’d to be, Home is the sailor, home from the sea, And the hunter home from the hill.”