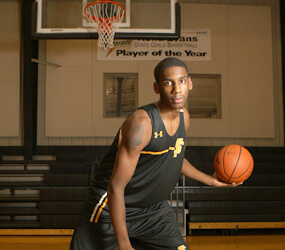 When St. Frances Academy boys’ basketball coach Mark Karcher looks at Wayne Sparrow, he sees a model for his own sons.

“He’s the kind of kid every parent would want,” Karcher said of his shooting guard.

Sparrow, who has a 3.2 grade point average, will play for the University of Richmond next year in the Atlantic 10, the same conference where Karcher starred for Temple University after himself leading St. Frances Academy to unprecedented heights.

“He’s been where we want to go,” Sparrow said of Karcher. “He has that knowledge of college and also the pros.”

Even with a busy practice schedule, Sparrow has placed an emphasis on studying.

“It’s pretty tough, but you have to have a strong work ethic,” Sparrow said.

Sparrow takes a calculus class taught by St. Frances principal Curtis Turner, who is also a deacon for the Archdiocese of Washington.

Sparrow “always presents himself as a confident leader who (is) a positive contributor to the school community,” Turner said. “I am impressed by the way he has earned the unqualified respect of his teachers as well as his fellow students.”

Sparrow will need to play a bigger role this season on the court for St. Frances, which lost its star scorer, Terrell Vinson, to graduation. Vinson now plays for the University of Massachusetts, yet another member of the A-10.

Sparrow’s seminal moment for the Panthers came last year, when he scored his team’s first 12 points against Lake Clifton. “They were all deep three-pointers with guys all in his face,” Karcher said.

“I was just feeling everything from the crowd,” Sparrow added. “I was feeling energy from everywhere.”

St. Frances finished last season as champion of the Baltimore Catholic League, one of the nation’s premier prep leagues. Sparrow said that playing for St. Frances is a privilege.

“It’s very important putting on the uniform,” he said. “You’re representing St. Frances as a whole. You’re part of a team.”